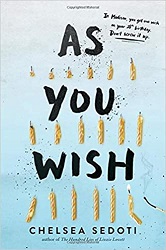 I’m so excited! As You Wish is the first book I’ve read that’s eligible for the 2019 Newbery Award, being a book published in America during 2018 for an audience that includes some group between the ages of 0 and 14. (In this case, it’s for 14 and up.)

I’m writing this review in August 2017 after finishing the book and before having discussed it with anyone at all. So this is entirely my opinion and not the opinion of anyone else – and I have no idea at this writing if the committee will consider it (or even if they’ll decide that the age range doesn’t fit the criteria) or what anyone else on the committee thinks of it. That’s my disclaimer – but I can still post this review after our decision has been announced in 2019. Writing a review will also help me remember what happened in this book as the year goes on and the number of books I’ve read gets bigger and bigger.

As You Wish is about a small town in Nevada near the site of Area 51. Alien hunters come through town often – but the town conspires to give them the message, “Nothing to see here! Move along!” Because the town of Madison, Nevada, has a secret.

That secret is that on their eighteenth birthday, every teen living in Madison gets a wish. And the wish will come true.

The book starts 25 days before Eldon Wilkes’ wish day. Eldon used to be the best football player in town – he was always naturally talented. But that was before this year, when his friends started getting their wishes. Now he’s a bit at loose ends, not used to being an average player. He doesn’t know what he’s going to wish for.

Eldon has seen lots of wishes go wrong. His dad wished to be the best football player in town – and then he got injured. Now he coaches their team. Eldon’s mother Luella wished that Harmon Wilkes (Eldon’s dad) would love her and only her forever. Trouble is, somewhere along the way, Luella stopped loving him.

She knows there’s no reversing her wish. She could divorce Harmon and move out of Madison. She could go to the other side of the world. But no matter what she says or does or how far away she moves, Harmon Wilkes will never stop loving her.

Eldon does some exploring. He asks people about their wishes. What did they wish? Why did they wish for that thing? Are they happy with it?

And so many people regret making the wish they did. Even the one person Eldon meets who gave up his wish regrets giving it up. There’s a lot riding on his choice – what will Eldon do?

This book also presents a realistic picture of a jock in a small town who is no longer the star of the team and looking for some meaning, dealing with friends, and also with missing his little sister, who was in a horrible accident when hit by a speeding car driven by a kid who was late for making his wish. If only they hadn’t taken his sister out of Madison so soon, but now she’s in a hospital in Las Vegas in a vegetative state.

My reading year is off to a great start!

Find this review on Sonderbooks at: www.sonderbooks.com/Teens/as_you_wish.html

Source: This review is based on an advance reader copy.