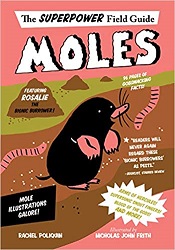 I checked out this book thinking it would work well for booktalking in the schools. I was absolutely right, but now that schools are closed I’m going to have to wait another year to do it. So let me tell you about it.

I never dreamed a book about moles could be so entertaining! This author uses a conversational tone and really emphasizes the Wow factor of many strange characteristics of moles. One way she does this is by describing nine mole superpowers: Astonishing Architect of Dirt, Indefatigable Paws of Power, Double-Thumb-Digging Dominance, Arms of Hercules, Super-Squidgibility, Early Whisker Warning System, Headless Hoarding, Saliva of Death (Maybe?), and Blood of the Gods.

She describes moles in ways you can understand, such as shaped like a potato. And gives scientific terms more vivid names. The prepollex is given the name Weird Fake Thumb, or WFT for short. Scientists say that moles’ blood has high oxygen affinity. This author says they have the Blood of the Gods.

Here’s an example of the writing style in this book, taken from the beginning, after she’s explained that moles are shaped like a potato:

Now, potato-shapeliness is definitely too dowdy to be a superpower. But believe it or not, it’s a MOLE’S SECRET WEAPON.

Scientists say moles and potatoes have cylindrical bodies. Cylindrical is a fancy way of saying “shaped like a tube.” But if you look at a potato, you’ll notice it is not shaped like a tube so much as shaped to fit inside a tube. And that is the important thing about potato-shapeliness – it helps moles fit in tubes. A giraffe would not fit in a tube. Neither would a poodle, nor a chicken, nor any other animal with long legs and a long, bendy neck. Big floppy ears would also not be good in a tube. Take it from me, if you’re going to live in a tube, it’s best to be shaped like a potato.

Of course, moles don’t live in any sort of tube. They live in underground tunnels. And not just any underground tunnel. Moles are MASTERMINDS OF UNDERGROUND EXCAVATION! They are ASTONISHING ARCHITECTS OF DIRT! They are TUNNELING TORPEDOES! Which brings me to ROSALIE’S FIRST SUPERPOWER.

So there you have it – I now know about the wonders of moles. I read an entire book about moles and enjoyed every moment of it. Who knew science could be so much fun?

Find this review on Sonderbooks at: www.sonderbooks.com/Childrens_Nonfiction/moles.html