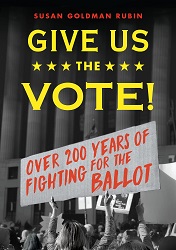 Give Us the Vote!

Over 200 Years of Fighting for the Ballot

Give Us the Vote! opened my eyes about the history of voting in the United States. Sure, I knew that African Americans needed a Constitutional amendment before they could vote, as did women. What I hadn’t realized is that it’s still always been a battle to have free and fair elections.

I didn’t realize, for example, that we didn’t have a secret ballot until the early 1900s. Before that, people would buy and sell votes – and they could follow up depending on how the person voted. But even after that, it was still possible to bully people at the voting booth or try to exclude people from voting.

The earliest method of voting was voicing one’s choice in public. A citizen would literally stand up and say who he was voting for or raise his hand. This made intimidation easy. Around Election Day, candidates plied voters with rum, wine, and beer to win their votes, or bribed them with food and money. Since only property owners could vote, candidates often bought “freeholds,” or temporary land rights, from large landowners. They gave these rights to landless men, and returned the deeds to the real owners after the election. Sometimes corrupt candidates would even pay voters not to vote so that they could win a majority.

This book covers the battle to gain the right to vote for many different groups, as well as the many different kinds of cheating that people have used successfully over the years our country has been a nation. One popular method is getting fake people to vote or the same people voting many times. But then another technique is stealing and destroying ballots and/or replacing them with fake ones. Getting the count correct is another whole area of danger. I didn’t realize that it wasn’t until the Civil War when soldiers wanted to vote that absentee ballots were allowed, and it was a big area of controversy, including new ways of committing voter fraud.

Gerrymandering is mentioned, with both old and recent examples from both parties. The author mentions a 2019 Supreme Court case that decided that this is an issue for elected branches of government to decide, not the federal courts.

This book is geared to teens, so it includes the movement to change the voting age from twenty-one to eighteen during the Vietnam War – and the current wish of some to bring it down to age sixteen.

Many people agree that high schoolers care about local and national problems and should be allowed to vote. Studies prove that teenagers can gather and process information, weighing pros and cons as well as most adults. Research conducted by FairVote shows that sixteen- and seventeen-year-olds are as informed and engaged in political issues as older voters. If they start voting in their teens, they are more likely to make voting a lifelong habit and increase voter turnout.

Books like this will help young people realize we can’t take for granted our rights to fair and free elections.

Find this review on Sonderbooks at: www.sonderbooks.com/Teen_Nonfiction/give_us_the_vote.html