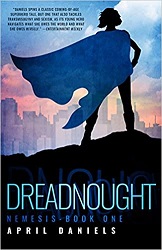 I picked up Dreadnought because of a recommendation by a transgender woman I follow on Twitter, and was so glad I did.

The set-up for this book is maybe a little typical: A fifteen-year-old is present when a superhero dies, so the mantle is passed to her and she gains all the powers of the superhero, to be the next one with that persona.

But in this case, there’s an extra twist. Danny, the person who received the mantle and the superpowers, is a transgender girl, who wasn’t out to anyone but herself. But part of the superpowers includes Danny receiving her ideal body – and in Danny’s case, that’s the body of a woman. She now looks like the girl she’s long known she is.

So besides figuring out what to do with her new superpowers and whether to let the world even know she has them, Danny also has to navigate suddenly looking female.

Danny’s abusive father does not take it well. He insists on bringing Danny to doctors and trying to set up testosterone therapy. Danny’s former best friend thinks he’s doing Danny a favor when he says he’s willing to date her. And the local Legion of superheroes doesn’t allow underage “white capes,” and not everyone currently in the Legion is okay with being joined by someone who’s transgender.

Meanwhile, Utopia, the supervillain who killed the last Dreadnought, is still out there. Danny does make a friend in Sarah, who has her own super abilities and acts as a “gray cape,” not affiliated with the Legion. Sarah convinces Danny that they need to deal with Utopia, and Danny thinks she owes it to Dreadnought for the wonderful gift of a female body.

The story that follows is intense. First, Danny’s father greatly increases his abuse, and then Utopia threatens the Legion itself as well as the world. And she hints that there’s something even more dangerous coming, something called Nemesis. Since right on the cover, we see Nemesis – Book One, I’m looking forward to reading more.

This book is beautiful with all the things any superhero book might have about grappling with new powers and whether great power really does bring great responsibility. But layered on top of that, Danny grapples with what it means to finally have a body that reflects the person she’s always been, and how people react to her. Danny has a very hard time with her father’s abusive words, and I appreciate that no simplistic answers are given to that. Even with superpowers, it’s hard to stand up to abuse.

This is a wonderful book, and I’m looking forward to reading the follow-up. (As soon as I can get to the library.)

Find this review on Sonderbooks at: www.sonderbooks.com/Teens/dreadnought.html