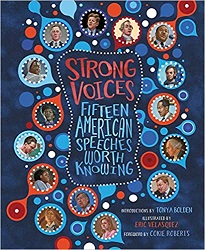 This is a book of great American speeches, so it is by its very nature inspiring. I was familiar with more than half of them, but I’m happy to have made a new acquaintance with the rest, and this is a fine collection covering the scope of the history of our nation and the important issues we’ve faced.

Tonya Bolden has written a detailed introduction to each piece and the speaker, and the speeches are spread out nicely on the pages, beginning with a spread that includes a painting of the speaker. The attractive format of the book appropriately showcases the words.

The speeches chosen place an emphasis on rights and freedoms, but also on inspirational challenges. It begins with Patrick Henry’s “Give Me Liberty or Give Me Death” in 1775, and finishes with Hillary Rodham Clinton’s “Women’s Rights Are Human Rights” in 1995.

In between, of course we’ve got Abraham Lincoln’s Gettysburg Address, Franklin Delano Roosevelt’s “The Only Thing We Have to Fear Is Fear Itself,” and Martin Luther King Jr.’s “I Have a Dream,” but we’ve also got a speech in 1805 by the Native American Red Jacket, “We Never Quarrel About Religion,” Lou Gehrig’s “Farewell to Baseball,” and Fannie Lou Hamer’s “I Question America.”

There’s a Timeline at the back. At first I liked how it places all the speeches on the line with historical events marked as well, going from the Boston Tea Party in 1773 to Hillary Rodham Clinton’s speech in 1995. I also liked that it has a series of shaded dots next to the line for long time periods – various wars, as well as the Jim Crow laws. But then I noticed that the spacing between things on the timeline isn’t proportional at all. World War I, from 1914-1918, takes up five shaded dots, for example, but World War II, 1939-1945, takes up thirteen shaded dots. But the Vietnam War, 1955-1975, takes up 93 shaded dots. So it’s mainly to lay out the events and speeches in order, and they’re spaced out to read clearly, but not so much to reflect how long different things lasted. So the timeline makes it look like the speeches were spaced out evenly throughout American history, but actually six of the fifteen happened after 1950.

Reading this book made me want to stand with these Americans and continue working for freedom and justice! I hope it will inspire children and teens the same way.

Find this review on Sonderbooks at: www.sonderbooks.com/Childrens_Nonfiction/strong_voices.html