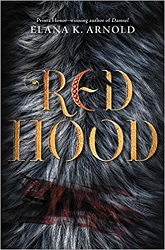 Red Hood is an amazing and impressive book. It’s not a retelling of Little Red Riding Hood, though you can almost think of it as standing the story on its head. And we do have wolves in the woods, a girl, and her grandmother.

But this girl in the woods is not prey, oh my, no! Instead she hunts down wolves – instinctively and fiercely.

For it turns out that sometimes, when there’s a full moon, men and boys turn into wolves. They attack and devour unsuspecting young women, who need a defender. Bisou turns out to be a ferocious defender.

But the book doesn’t begin that way. It begins with Bisou in the back of a truck, trying out sex with her boyfriend, whom she loves very much. But before the night is over, she’s in the woods alone, being attacked by a wolf – which she kills. The next morning, a boy is found dead in the woods where Bisou thought she left the wolf.

Now I loved Elana K. Arnold’s earlier book, Damsel. After going a little way into this book, I decided that both books were similar. Both books are very explicit about sex, almost clinically descriptive. Both books portray men cruelly exploiting women – but then meeting with vicious retribution – and that violent retribution is frighteningly satisfying.

However, by the time I was finished, I was super impressed with what the author pulled off here. Because not every boy turns into a wolf. Bisou has a wonderful relationship with her boyfriend, a loving and kind young man. There’s a point where Bisou has something to do having to do with hunting on a day when they usually have sex – and James is disappointed, but he doesn’t give her a hard time at all. I was waiting for it to all be a big trap and for him to turn into a wolf – and he remained a loving and kind person.

In fact, there’s another boy at their high school who harasses and abuses one of Bisou’s friends – and they deal with it without magical powers, and he never turns into a wolf. (I’m trying not to give spoilers. I don’t think this will ruin it for you.) I kept expecting every jerk to end up being a horrible wolf or the apparently loving individual to be a wolf at heart – and that just doesn’t happen here, and that impressed me.

What’s more, though the heroine of Damsel was basically alone, Bisou makes friends with other girls in this book. So as well as becoming a testament for girls standing up for themselves and standing against sexual violence, it also tells a beautiful story of the power of sisterhood and girls supporting each other as they do that standing.

I ended up so impressed with this book. It ends up being richly nuanced, telling a story of a girl gaining new powers to defend the weak against sexual violence, but not being alone as she navigates those new powers. It shows sexual violence as a horrible threat against women – but not a threat hiding in every man’s heart, and something that both men and women are willing to help destroy.

Find this review on Sonderbooks at: www.sonderbooks.com/Teens/red_hood.html