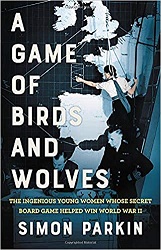 A Game of Birds and Wolves

A Game of Birds and Wolves is the story of how Great Britain used an elaborate war game to strategize and win the war against the U-boats during World War II.

I hadn’t realized how important the Battle of the Atlantic was. Britain came perilously close to starving. During World War II, 2,603 merchant ships and 175 naval vessels escorting merchant convoys were sunk. More than 30,000 merchant seamen and more than 6,000 Royal Navy sailors died in the Atlantic, mostly because of attacks from U-boats.

The subtitle is a little bit misleading. This book is mostly about the man, Gilbert Roberts, who developed the giant board game and taught it to British naval officers. But his staff, the people running the game, were indeed women, officers in the Wrens, the branch of the British navy for women.

I’ve been reading a lot of children’s nonfiction, so I did get impatient with the extreme level of detail in this book. We hear about the establishment of the Wrens, about specific ships getting sunk in the Atlantic, about the glamorous lives on shore of U-boat commanders, and how Gilbert Roberts had been rejected by the navy. It seemed like the first half of the book was establishing the many, many different characters and the situations for both the Germans and the British.

But the tension does heighten as the WATU – the Western Approaches Tactical Unit – begins deducing the strategies that U-boats were using and developing ways to combat it. At the same time, we read about an admiral asking for more U-boats and finally getting them. It all builds to a dramatic battle where one of the Wrens charting the position of the ships in a giant sea battle is aware that her fiancé is in the thick of things.

As a gamer, it made sense to me that playing strategy games helps admirals devise effective strategies in real-life scenarios. They developed a 6-day course and captains coming in from time at sea would go through the course. They simulated visibility at sea by putting the captains behind a canvas screen and plotting the positions of small models of ships on the linoleum floor. They used green chalk for the U-boats, which couldn’t be seen from an angle. They made a dramatic simulation before computers could be used to do it.

The Wrens on staff were responsible for moving the models and marking the courses of the ships and U-boats involved. I enjoyed the scene where they had a young Wren play a scenario against a high ranking naval officer. She was experienced with the game and soundly defeated him.

It all gives an interesting side of World War II that I’d never heard about before.

Find this review on Sonderbooks at: www.sonderbooks.com/Nonfiction/game_of_birds_and_wolves.html