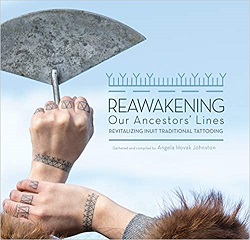 I read this book because it won a 2020 American Indian Youth Literature Award Honor in the Young Adult category, and I’m glad I did.

This book tells the story of the Inuit Tattoo Revitalization Project, an effort begun by Angela Hovak Johnston to revive the traditional tattooing of the Inuit people. Here’s a small part of her explanation in the Introduction:

This eight-year project began with my personal journey to permanently ink myself with the ancient symbols that were worn by my Inuit ancestors. The last known Inuk woman in the Nunavut area with tattoos done the traditional way passed away in 2005; that is when my passion grew. Knowing she was the last inked Inuk woman, I strongly believed tattoos couldn’t become just another part of history that we only read about in books, so I pushed forward with my dream of having tattoos. I knew I had a role to play. It took me years of hard research and finding the right tattoo artist to do these markings on my face. Not giving up, in 2008, I finally had my first facial tattoos. Inuit traditional tattoos, almost lost as a result of missionaries and residential schools, have come back. While tattoos skip three generations in some families, through this project, we thankfully had the pleasure of inking a family of women who carried three generations of new tattoos.

This book documents a part of the project where Angela and her team met for five days in April 2016 at the Kugluktuk Heritage Visitor Centre in Kugluktuk, Nunavut, and gave traditional tattoos to the Inuit women who came.

The photographs by Cora De Vos, an Inuk photographer, make this book exceptional. Each participant gets a spread. On one side the woman explains the significance to her of the tattoos she received along with various pictures of receiving the tattoos or modeling the tattoos. On the opposite side, there’s a portrait of the woman with the finished tattoos, often in traditional Inuit clothing, and always looking beautiful and strong.

Each woman speaks for herself, which makes the text a little bit repetitive, since receiving the tattoos meant similar things to many of the women. But I did appreciate that all were given a voice and a moment to shine. All the women are truly beautiful and this project brings that out in such a lovely way.

The photos are so gorgeous, readers might be tempted to try to get similar tattoos for themselves, so there is an Author’s Note about cultural appropriation at the back – this project is going to focus on giving Inuit women the opportunity to receive the traditional tattoos first.

The book is full of hope and joy about Inuit women reclaiming their history and traditions. You can see their emotion in the photographs and hear the pride in their voices. This is a lovely thing for anyone of any ethnicity to witness, and I’m very glad I discovered this beautiful book.

Find this review on Sonderbooks at: www.sonderbooks.com/Childrens_Nonfiction/reawakening_our_ancestors_lines.html