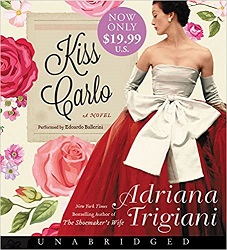 I listened to Kiss Carlo as a Skip-the-Line loan for an eaudiobook during the Covid-19 pandemic, when I’m listening to audiobooks on my phone (instead of CDs in the car) for the first time in my life. So I didn’t have to wait for an available copy, but I had to finish in 14 days, and my status as a library employee wouldn’t help me fudge that. This meant a little extra time doing puzzles!

The book is a historical novel about a big Italian family in South Philadelphia shortly after World War II. Nicky Castone has been engaged to his girl Peachy for seven years. She even waited for him during the war. He drives a cab for his family’s taxicab company, which is in a feud with another branch of the family and their taxicab company. Nicky is an orphan, but his aunt and uncle love him as their own. He’s also looked after by Hortense Mooney, the black dispatcher at the cab company. She tells Nicky that Peachy isn’t right for him.

Another plot thread deals with Calla Berelli, who is taking over her father’s theater, which runs Shakespeare plays year round. The theater is struggling, and the rise of television isn’t helping. Nicky’s been doing odd jobs at the theater for a long time, wherever he’s needed, and one night – which happens to be the night he finally told Peachy he was working at the theater – an emergency calls an actor away, and Nicky, who’d been prompting and knew all the lines, had to take the part.

In that moment, Nicky begins to realize that acting makes him feel alive. His fiancée is not at all pleased, which eventually tips Nicky off that maybe they aren’t right for each other after all.

But the path Nicky travels takes many twists and turns from there, including impersonating Carlo, an ambassador from Italy scheduled to be an officiating dignitary at a jubilee celebration in a small town in Pennsylvania. Nicky does it to escape Peachy’s angry father, and Hortense accompanies him as an American government official to lend him credence.

Okay, after that paragraph – let me give up trying to explain the plot. But it’s all in good fun. Some of the turns the plot takes are maybe a little unlikely, but the story is enjoyable. The big strength is in portraying the close-knit Italian-American community and the various characters along the way.

The narrator did a great job voicing the characters, expressing their characters with enough consistency that I could tell who was speaking by the voice used, and with a nice use of accents.

This was a light-hearted listen that still pulled you into the world of the book.

Find this review on Sonderbooks at: www.sonderbooks.com/Fiction/kiss_carlo.html