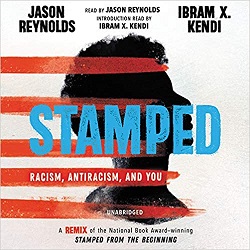 Racism, Antiracism, and You

Wow. This book claims more than once that it is NOT a history book, it is a NOW book. All the same, I learned more about history – and how it relates to my own life in the present – in four short hours than I have learned in a long time.

This book is a “remix” of Dr. Ibram X. Kendi’s book for adults, Stamped from the Beginning: The Definitive History of Racist Ideas in America. I heard the two authors talk about it in an event sponsored by School Library Journal last week, and they said that Jason Reynolds did the writing, in order to appeal to young people, and he used the original book as his research material. They said that Dr. Kendi was kind of like Jason’s research assistant. (And then they both laughed.)

The result? Yes, it’s written in a way that children can understand and not be bored and will grasp the nuances. But he doesn’t speak down to children, and there’s absolutely nothing that would make an adult feel like it’s beneath them. So I think the result is an interesting and dynamic summary of Dr. Kendi’s work, presented in a way that will have you mesmerized. (Jason Reynolds reading it is especially good.)

It’s short – only a little over 4 hours – and packed with information. To be honest, I retain information better when I see it than when I hear it. So I’m planning to read both this book and the original adult book in print form so I can refer back and better absorb all that information. But listening to it first did get my eyes opened.

The authors talk about three kinds of attitudes. The first is Racism, which they say is a system, and a set of ideas, not a set of people. A person may express racist and antiracist ideas all in the same day, let alone all in the same lifetime. Therefore saying, “I’m not a racist.” isn’t helpful, because you may have both antiracist attitudes about some things and racist attitudes about other things. It’s also good to be aware how much racism is baked into our culture, so it’s hard to escape.

Racist attitudes developed because people wanted to justify slavery. The authors even cite the first racist. Other people may have had the same attitudes before him, but he qualified as the first racist because he wrote about those ideas in a book that was widely read, making people feel good about enslaving Africans, with various justifications given to emphasize that they were inferior to whites and destined by God for slavery.

The second kind of attitude is Assimilationism. The assimilationist attitude is that black people can be good and worthy – if they become like white people. These ideas are much more subtly racist. On the surface, they look like they are uplifting black people, but when you look more closely, they talk about exceptional black people who achieve success, and imply that those who do not check off the boxes are less than these others.

The third attitude is the one to strive for, Antiracism. This attitude sees the inherent good in all people, and doesn’t imply that black people need to change in order to be fully human and fully worthy of respect.

The book shows how racist ideas are baked into our culture, and how laws have been made to reinforce those ideas. This Not-a-History Book did go through and explain ways Racism affected our laws and culture even after slavery was officially ended. When he talked about the 70s and 80s, I was shocked by how many things he cited, which I’d heard from my parents, were based in racism – without openly admitting they were based in racism. And he talked about how people could run for office without openly talking about racist attitudes while at the same time playing on racist fears.

Something that was striking to hear, knowing that it had been written well before current events and our current president’s tweet last week – was how the phrase “Law and Order” was used in campaigns to send the message that this person was going to crack down on black people – while pretending they’re only going to crack down on crime.

The book didn’t touch Trump’s presidency, stopping with the election and presidency of Barack Obama, while still pointing out the backlash from that and never implying that was by any means the end of racism. I was a little disappointed it stopped there, especially as I am seeing racist issues play out before my eyes. Maybe there is too much material?

But my goodness, I was shaken and enlightened by this book. I do plan to go over it again in print form, as well as reading the adult book it’s based on.

I highly recommend this book to anyone. Now, on the one hand, I don’t feel qualified to tell any black person what books they should read about racism. On the other hand, it was written by two black men, and it goes beyond personal experience and points out history that you won’t hear about in school, so it has something to offer them as well. As for white folks like me? Well, I for one had so much to learn from this book. If you read it or listen to it, you’ll be thinking these things over for a long time to come. And as a NOW book – you’re going to now be able to spot racist and assimilationist ideas when they happen around you.

Find this review on Sonderbooks at: www.sonderbooks.com/Childrens_Nonfiction/stamped.html

Source: This review is based on a library eaudiobook from Fairfax County Public Library.