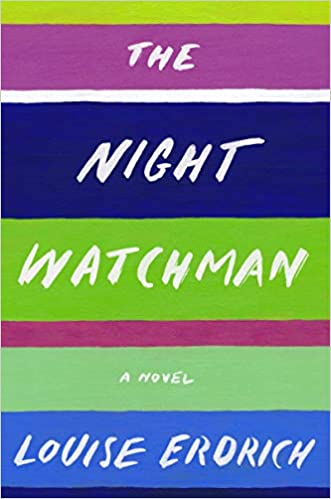 Set in 1953, The Night Watchman tells about people of the Turtle Mountain Band of Chippewa in North Dakota and how they stood up to the federal government of the United States threatening to take their lands. Here’s what the author wrote in a piece at the front of the book:

On August 1, 1953, the United States Congress announced House Concurrent Resolution 108, a bill to abrogate nation-to-nation treaties, which had been made with American Indian Nations for “as long as the grass grows and the rivers flow.” The announcement called for the eventual termination of all tribes, and the immediate termination of five tribes, including the Turtle Mountain Band of Chippewa.

My grandfather Patrick Gourneau fought against termination as tribal chairman while working as a night watchman. He hardly slept, like my character Thomas Wazhashk. This book is fiction, but all the same, I have tried to be faithful to my grandfather’s extraordinary life. Any failures are my own. Other than Thomas, and the Turtle Mountain Jewel Bearing Plant, the only other major character who resembles anyone alive or dead is Senator Arthur V. Watkins, relentless pursuer of Native dispossession and the man who interrogated my grandfather.

Pixie, or – excuse me – Patrice, is completely fictional.

The story is about Patrice, who works in the Jewel Bearing Plant. But she needs to take some time off to try to find her sister, who has gone missing in the big city and is in trouble. Meanwhile, more than one man would like to win Patrice’s attention, and Thomas is disturbed by a letter that came from Washington, DC. Eventually, he needs to put together a delegation to make their case before Congress. Various colorful characters will help him out.

I read this book and finished very happy that these people successfully stopped their nation from being terminated. However, historical notes at the back, telling which parts came from truth, made my heart sink with this paragraph:

In all, 113 tribal nations suffered the disaster of termination; 1.4 million acres of tribal land was lost. Wealth flowed to private corporations, while many people in terminated tribes died early, in poverty. Not one tribe profited. By the end, 78 tribal nations, including the Menominee, led by Ada Deer, regained federal recognition; 10 gained state but not federal recognition; 31 tribes are landless; 24 are considered extinct.

But the book itself tells a good story, all the more poignant because it’s based in truth. A story of people up against the powerful, but also living and loving and making lives together. It is comforting that these people indeed triumphed in their struggle.

Find this review on Sonderbooks at: www.sonderbooks.com/Fiction/night_watchman.html