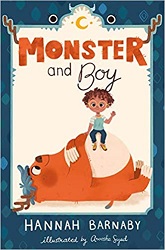 Monster and Boy is a charming beginning chapter book that tells about what happens after a mother tells her son during a bedtime story that there is no such thing as monsters.

The monster who lives under the bed and loves the boy hears the mother say this. He can’t resist. After the mother leaves, he decides to prove that she was wrong and shows himself to the boy. But things quickly get out of control.

The boy was silent. The monster thought maybe the boy couldn’t see him, so he made himself light up.

The boy took a deep breath and opened his mouth, and the monster knew he was going to scream.

The monster panicked. He did the only thing he could think of.

He swallowed the boy.

There’s a chapter discussing this with the reader. Then I like the part about what happens next:

The monster was instantly sorry that he’d swallowed the boy. The boy felt strange in his stomach, heavy and nervous. The monster did not like how it felt, and also he missed the boy terribly.

Then he heard a small voice from inside himself.

It was the boy.

So their first problem is getting the boy out of the monster. But when they manage that, it turns out that the boy is now very small. So they must figure out how to get him back to his normal side.

This turns out to involve adventures downstairs (Monsters are terrified of going downstairs.) and an encounter with another monster – the boy’s little sister. Oh, and a swim in the toilet bowl.

It’s all wonderfully entertaining. The sentences are simple, and there are pictures on every page, but this story will make you laugh even if you mastered reading long ago.

The back cover says this book is introducing a new illustrated chapter book series, which is fantastic news for kids gaining confidence in their reading.

Find this review on Sonderbooks at: www.sonderbooks.com/Childrens_Fiction/monster_and_boy.html