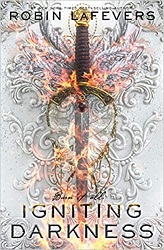 Ahhhhh! Such a magnificent series!

Series? you ask. Isn’t this supposed to be the second book in a duology? Well, yes it is, but you can think of the duology as a continuation of the trilogy that began with Grave Mercy, because it begins where the trilogy ended, and you will better understand the characters and relationships of the duology if you’ve already read the trilogy.

I got annoyed with the first book of the duology, Courting Darkness, because it did not follow this pattern. Though it did tell of a new daughter of Death from the convent, it did not complete her story at all and most issues were unresolved. All that intricate pulling together of a tapestry of threads was missing.

Because of my annoyance, I did not preorder my own copy of this book, but just read a library copy. I have already rectified that mistake. I ordered a copy so I can have my own when I reread all five books, which I have no doubt I’m going to want to do from time to time.

Was I missing intricate tying together of disparate threads? They’re all pulled together here. Courtly intrigue and daring adventure? It’s here. Satisfying love stories? Yes. Apparent doom and an appearance that victory is impossible? Yes. Utterly clever plans to overcome the insurmountable odds? Yes, again we’ve got them.

And it all comes together in an ending that’s worthy of the five magnificent books.

I won’t say a whole lot about details, since I want those who haven’t started this series to start at the beginning with Grave Mercy. I will say this is rich historical fiction of the kind I like best – for all we know, it could have really happened. It features the Duchy of Brittany, which at the start of the series and in actual history was ruled by a young duchess who had been promised in marriage to competing nobles from various places.

It also features assassin nuns! In the small touch of fantasy in these books, the heroines are daughters of Mortain, the god Death, one of nine gods of Brittany who were cleaned up and made saints by the Church. They serve the Duchess of Brittany during a time when women aren’t usually given that kind of power. Indeed, the Duchess’s new husband isn’t too happy about her wielding power of her own, and his sister who had been regent before he came of age, has her own plans for holding onto power.

This is a book of historical political intrigue, of desperate plots within plots, and women apparently without power figuring out what they can do to stand up against evil men who are accustomed to doing anything they want. It does help that those women have gifts from their father, the god of Death, and training from those who serve Death.

And you are lucky, Dear Reader – you don’t have to wait for the next book to come out! I’m definitely planning to sit down and read all five books some time in the near future.

Find this review on Sonderbooks at: www.sonderbooks.com/Teens/igniting_darkness.html