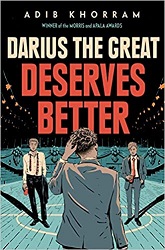 I was delighted when I heard this book was coming out. Its predecessor, Darius the Great Is Not Okay came out during my Newbery year, when I was reading everything, so I compared it with lots of other books, and still named it my #3 Sonderbooks Stand-out in General Teen Fiction for that year. In the first book, Darius is dealing with depression in the context of bullying and trouble getting along with his father. Then the family makes an extended trip to Iran to see the grandparents he’s never met, because his Babou is dying of cancer. In Iran, he feels like he fits in even less, but makes his first true friend, ever.

In that book, the reader is pretty sure Darius is gay, but it’s never explicitly stated, and Darius hasn’t put it into so many words. This book begins as Darius is with his boyfriend getting a haircut to match the other guys on his soccer team.

So Darius came out as gay in between books, though he hasn’t told his grandparents in Iran. Relationship issues are a big part of this book, and Darius’s boyfriend wants to have sex, but Darius isn’t ready. This involves discussion of body parts that I don’t even have, so I didn’t relate to it quite as much as the first book, but I still love Darius and his over-willingness to examine his feelings. Because a book narrator who examines his feelings makes the reader realize their own feelings are not so unusual.

Darius is getting along better with his father, but his family is under stress because of the money they spent to go to Iran, and they’re working extra hours. So they decide to have his father’s parents come stay with them – Oma and Grandma. Darius hoped they would have some insight into being queer, but they aren’t very forthcoming. I was interested when I found out that Oma is a transgender woman, and she didn’t come out as transgender until after her grandson Darius was born.

It’s hard to explain why these books are so heart-warming. Darius is someone I can’t help caring about. He’s so authentic, and cries much more often than he’d like to. In this book he’s dealing with romantic problems, which are perhaps more typical problems for an American teen. He handles them with thoughtfulness and sensitivity, but also enough mistakes that you root for this kid.

The cover does give away that there will be some romantic decisions to make, but they didn’t show up in the way I expected. And it does point out that romantic quandaries are universal, whether you’re gay or straight. I hope this isn’t the last book about Darius the Great.

Find this review on Sonderbooks at: www.sonderbooks.com/Teens/darius_the_great_deserves_better.html