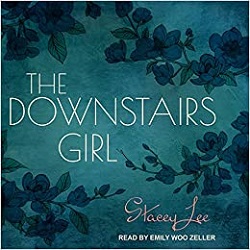 Set in 1890 Atlanta, 17-year-old Jo Kuan gets fired from the hat shop where she’d been perfecting her skills, in favor of a white assistant. The man who’s taken care of her all her life in the absence of her parents gets her a job as a lady’s maid back at the stately home of the family where he works as a groom.

Jo and her caregiver, Old Jin, live in an underground space remaining from the days when escaped slaves went through Atlanta, very careful to hide their presence. Jo indulges herself listening to the conversation of the family in the print shop over her bedroom. When they need something to boost circulation in their newspaper, she submits an advice column, written by Miss Sweetie, giving modern views in a clever way. Her column helps newspaper circulation turn around, but she knows she has to be anonymous because Atlanta society would be shocked if they knew they were listening to a Chinese girl.

Meanwhile, Jo uncovers a clue about the identity of her parents, but she has to deal with an unsavory character to find out more. And the unkind young lady Jo works for has secrets of her own. It all builds up toward Race Day, the social event of the year in Atlanta. Old Jin is keeping secrets of his own. Jo worries that he’s arranging a marriage for her, and she’s not ready to give up her freedom.

I enjoyed this eaudiobook, not sure at first I wouldn’t be sorry to start such a long one – but I finished well before the book was due, interested in the characters and their predicaments. I thought there were a lot of coincidences and things that worked out far too well to be believable, but it did make a fun story, and I was happy with the good outcomes. I especially enjoyed the clever letters from Miss Sweetie that started each chapter. Also, Jo’s voice in telling the story was pleasant, using apt metaphors that gave you the feeling of the time and place.