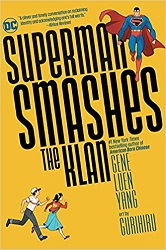 This fabulous graphic novel is based on a story told on the radio in the 1940s, and it’s wonderfully timely today. A Chinese family has moved to Metropolis. The older brother plays baseball and is welcomed on the neighborhood team at the “Unity Center,” sponsored by a priest, a pastor, and a rabbi. The younger sister, Roberta, misses their home in Chinatown.

But there’s a group that doesn’t want a Chinese family to move into their neighborhood – the Klan of the Fiery Kross – and they burn on cross on the Lees front lawn that night.

And you know what happens, because it’s in the title – Superman smashes the Klan! But along the way there’s plenty of danger and mixed loyalties and evil plots, and the kids get to ride with Superman as he – leaps. That’s right – Superman didn’t yet realize he could fly. In this book, Superman comes to terms with who he is, and that he, too, is an alien, even though his skin is white. And he learns to use more of his powers.

One of my favorite parts was a flashback to a time when teenager Clark Kent went to the circus with Lana Lang. Clark notices that the Strongman is the same guy who took their tickets. Their conversation goes like this:

What? No! That guy was bald! This guy’s got longer hair than mine!

Well. . . It’s not just that. Look at the way he carries himself! And that costume!

You like his costume?! He’s wearing his underwear on the outside!

Yeah, but he makes it work somehow.

Later the Strongman advises Clark, “The more colorful the costume, the better.”

It’s nice seeing Superman defeat bad guys who are still with us today.

The Grand Hornet of the Klan tells Superman that nothing binds us to people who don’t share our blood or our history. Superman responds by saying that we are bound together by the future. “We all share the same tomorrow.”

Find this review on Sonderbooks at: www.sonderbooks.com/Childrens_Fiction/superman_smashes_the_klan.html