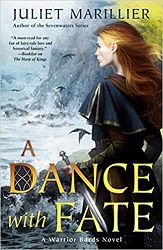 A Dance with Fate

I rave about Juliet Marillier’s books every time, and this one did not disappoint me. She has the ability to pull you into her characters’ hearts and deeply care about their predicaments. There’s always an element of the Otherworld in her books, and there’s always some romance, but they don’t follow a formula or a set pattern at all.

In this book, Liobhan and Dau are ready to prove they are Swan Island warriors and deserve a permanent place on the island. But in an exhibition battle, Dau trips and hits his head. Before they’re sure he will survive, his family is contacted, even though Dau wanted nothing to do with them because of the cruelty he faced there from his older brother.

Dau does survive, but he is blind and an invalid, so he must go back to his father’s holding. His family doesn’t accept the verdict that the injury was accidental and demand that Liobhan serve on the holding as a lowly bondservant.

As feared, they both get pulled into the dark secrets Dau’s brother is keeping. He has not become any less cruel over the years. And meanwhile, Liobhan’s brother Brocc is in the Otherworld, trying to keep the folk safe and having to make a terrible bargain along the way. We guess there will be some overlap in the two stories, since Liobhan, Dau, and Brocc alternate as the viewpoint characters.

Liobhan is the daughter of Blackthorn and Grim, from the trilogy that told about them. And Swan Island was established in a series before that. But that all adds to the richness and isn’t necessary reading ahead of time. If you haven’t read Juliet Marillier before, you can jump right in. If you have, you will be delighted to find a new installment. There were a few threads left hanging, so I happily anticipate that this will end up being a trilogy as well. Her trilogies are the kind I love most – each book in the trilogy has its own complete story, but they all weave together. I think before long I’m going to need to do a grand rereading of her books. (And there are still a few older ones I haven’t read.)

Do you get the idea? If you love fantasy at all, or specifically Celtic fantasy with romance, you will love these books.

Find this review on Sonderbooks at: www.sonderbooks.com/Fiction/dance_with_fate.html

Source: This review is based on my own copy, preordered from amazon.com