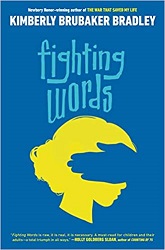 Wow. Kimberly Brubaker Bradley is better than any writer I know at instilling in my heart a fierce, compassionate love for girls who have come through abuse. That may sound like it’s a sordid, gritty story – but she manages to write about such things in a way that’s full of light and beauty.

I’m thinking of her Newbery Honor-winning book The War That Saved My Life along with this one. The books are totally different, but they both have beautiful young girls trying to make the best of things who don’t even realize that what they’ve been through is not normal and is not what they deserve.

Wait a second. I’m afraid that telling you that might put you off. So before I get into what this book is about, I need to tell you that you need to read this novel! And that your children older than 4th grade or so should read this novel! And that you and they will love it and you will love the characters and you will come away with a better understanding of how to stand together with anyone who’s being treated badly. This book has gotten SEVEN starred reviews – that’s every major book review publication. It’s that good.

Yes, Fighting Words deals with sexual abuse – but it happened in the past. When it comes out what happened, the description is not graphic or detailed at all. The fact is, it’s unfortunately true that one in ten children will be sexually abused before they are eighteen. So even if your child is not, they may have a friend who is. And although you might want to protect your child from even thinking about this, instead you can let them read about it in a beautiful context of love and grace through the safe pages of a book that shows a kid coping with it as best she can and with the help of supportive grown-ups.

Della (short for Delicious) is telling her story in this book. The author nicely gets around the problem of being realistic while not including lots of swear words by having Della say this at the beginning:

Suki says whenever I want to use a bad word, I can say snow. Or snowflake. Or snowy.

There’s a lot of snow in this story.

As the story begins, 10-year-old Della and her older sister Suki are in a new foster home in Tennessee, and Della’s starting at a new school. Their mother is incarcerated in Kansas, after having a psychotic break from overuse of meth. They can’t visit her and she wouldn’t recognize them if they did. But Suki has always taken good care of Della, especially in the five years since her mother was arrested.

During those years, Della and Suki were staying with Clifton, who was their mother’s current partner before she was incarcerated. But for some reason, they fled Clifton’s place. Now they’re in foster care and Della’s starting a new school and they’ve been sent to therapists, and Della’s writing out her story.

Della’s teacher isn’t very happy with Della and her frequent use of snowy language. Suki gets a job at the local grocery store and Della ends up having to go to an after-school program most days, and hangs out at the grocery store deli on Friday nights. But Della does make friends with some other girls in her class.

I’m going to talk about a truly wonderful scene toward the end of this book. I don’t think it’s really a spoiler, because this is only a subplot, but if you don’t want to hear about anything except the beginning of a book, stop right here.

There’s a boy in their class who copied an older friend by snapping girls’ bra straps. But fourth grade girls mostly don’t wear bras, so instead he gives the girls a hard pinch in the middle of their backs and calls them babies. This makes Della angry. When she responded by swearing at him, she got in trouble. When she responded by punching him, she got in trouble. But in a lovely scene later in the book, after she’s had some sessions with a therapist, here’s what happens:

I jumped to my feet. I spun around and stepped forward so my entire body was about an inch away from Trevor’s. I pulled my fist back to punch him.

And then I didn’t.

I didn’t punch him.

Instead I looked him straight in the eye. I said, loud and clear into the silence that had fallen on the class, “You just pinched me, and you need to stop. Never touch me again. Never touch me or any girl in this class without permission ever again.”

At first, the teacher just wants Della to sit down. But one by one, six other girls stand up and back Della up. The teacher finally has to take it seriously. And she does affirm what Della said, that no one is allowed to touch anyone else without permission.

The whole series of incidents seems so much more realistic than if Trevor just reformed. We do get some insight into what he’s dealing with, but also that what will keep him in line is that he won’t get away with it. I loved the way Della found her pack and when she spoke up, her friends had her back. The book also acknowledged that everybody any of the girls had mentioned it to before this had not taken it seriously. But that this, too, is an issue of consent.

So yes, this book models good behavior learned from therapists – but it doesn’t feel canned and doesn’t feel trite. You see a girl with a fighting spirit trying to deal with awful things that have happened to herself and her sister. The overall message is that they will come through.

There’s an Author’s Note at the back, and it begins like this:

The first thing I want you to know is, it happened to me.

The second thing is, I was able to heal. It took time, and work, and I did it. People can always heal.

Find this review on Sonderbooks at: www.sonderbooks.com/Childrens_Fiction/fighting_words.html