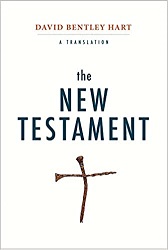 It seems so presumptuous to write a review of The New Testament! Rest assured this is a review of this particular translation in order to recommend it to other students of the Bible.

I was interested in this translation because of reading the author’s book on universalism, That All Shall Be Saved. The translation came first, and I’ve found that many proponents of universalism have an in-depth knowledge of biblical Greek. This author is no exception.

He does claim to have approached the text without theological bias, admitting that there will always be some, but trying to be faithful to what is written. Here’s a segment from his Introduction:

I should note that this is not a literary translation of the New Testament, much less a rendering for liturgical use. If it conforms in any degree to any current school of translation theory, it is certainly that of “formal,” rather than “dynamic,” equivalence – though, in fact, I believe that no translator should entrust his or her choices to the authority of any “theory” whatsoever. Again and again, I have elected to produce an almost pitilessly literal translation; many of my departures from received practices are simply my efforts to make the original text as visible as possible through the palimpsest of its translation…. Where the Greek of the original is maladroit, broken, or impenetrable (as it is with some consistency in Paul’s letters), so is the English of my translation; where an author has written bad Greek (such as one finds throughout the book of Revelation), I have written bad English.

I’m writing this review after finishing the entire book – for many months, I’ve read one two-page spread per day as part of my devotions. I may start up again on this, but I will also keep the book on hand for times when I’m curious about how this author renders the original Greek, to get another perspective on a biblical passage and, I think, a clearer idea of how it was written in the original text.

I have to say that in all my reading of this book, there was one verse that made me cry out in delight at his clear rendering. It was Philippians 2:10-11 –

So that at the name of Jesus every knee – of beings heavenly and earthly and subterranean – should bend, And every tongue gladly confess that Jesus the Anointed is Lord, for the glory of God the Father.

The insertion of the word “gladly” means you can’t pretend this verse means that one day God’s going to force knees to bow.

But I also enjoyed the many footnotes (Really!) with explanations for why he translated things a certain way. And I especially enjoyed the section at the back titled, “Concluding Scientific Postscript.” It includes some particular notes on the Prologue of John’s Gospel and some details in the Greek that can’t really be expressed in English. Then he includes notes on translating nineteen specific words, beginning with aionios, “which in most traditional translations is rendered as ‘eternal’ or ‘everlasting,’ except in the many instances where such a reading would be nonsensical.” He goes on for several pages about why this is not an appropriate translation, referencing extra-biblical Greek sources as well as the Greek-speaking church fathers, besides giving other reasons for his choices. Of course this is a crucial point for universalists, and he makes a strong case. The second word he looks at in depth is gehenna, and he explains why “hell” is not an appropriate translation for that. The rest of the words do not apply so particularly to universalism, but it’s all tremendously interesting and enlightening, and gives insight into what the Bible says.

David Bentley Hart finishes up this volume with these words:

I do hope this translation will, for many readers, help to cast new light on his or her understanding of the origins and contents of Christian faith. And I repeat my assertion, which may seem slightly incredible, that I have tried not to advance my theological or ideological agenda, but rather to capture in English as much of the suggestiveness and uncertainty and mystery of the original Greek as possible, precisely in order to prevent any prior set of commitments from determining for the reader in advance what it is that the text must say (even when it does not).

Why review this book? To let other students of Scripture know about this amazing resource. I hope some of you will seek out a copy to aid in your own study.

Find this review on Sonderbooks at: www.sonderbooks.com/Nonfiction/new_testament.html