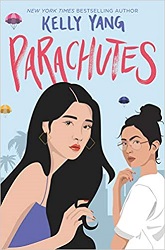 Parachutes is a story about a Chinese teen who’s been dropped by her wealthy parents into America to get an American education. Parachutes is the term used to describe these kids, many of whom end up on their own without any supervision, which comes with its own problems.

This book focuses on Claire, a junior in high school who’s sent to America from Shanghai, and Dani, also a junior in high school, whose single mother decided to get some much-needed cash by renting a room to a Chinese student, Claire. They both attend the same private school, but the parachutes are given separate classes from the American kids. Dani’s been working hard on the debate team, and with extra encouragement from her coach, she’s hoping to get to go to an elite debate competition and win a scholarship to Yale. Her after-school job is cleaning houses, where she gets a window into the lives of the rich, including some fellow students.

Meanwhile, Claire spends time with her fellow parachutes, who prioritize shopping and parties. She catches the interest of a boy whose father owns one of the largest corporations in China. Claire’s and Dani’s lives intertwine in unexpected ways.

There’s a content warning at the front of the book: “This book contains scenes depicting sexual harassment and rape.” So it’s not a spoiler for me to tell you that’s in there. My main reservations about the book have to do with how the book ended, so I’m not going to go into detail. This was colored by my recently having read Know My Name, by Chanel Miller, who was the victim in the famous Stanford rape case, and having read that book made me less enthusiastic about how this one ended than I would have been otherwise. (How’s that for vague?)

And I hate that it’s realistic that American teens – and international teens in America – have to deal with these things. The parachutes portrayed were at even more risk, being far from parental supervision and facing peer pressure to spend extravagantly and take advantage of their independence.

The story here was well-crafted, alternating between the two girls’ perspectives, so the reader was more aware than they were about how their lives were intertwining. The book kept me up late reading, and you will be rooting for both girls.

Find this review on Sonderbooks at: www.sonderbooks.com/Teens/parachutes.html