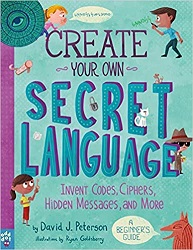 Create Your Own Secret Language

I’ve always liked books about codes, ciphers, and cryptography. In fact, I made a video series for kids this summer while the library was closed about using mathematical concepts to make ciphers.

This book shows us many kinds of codes and ciphers (though not the same ones I used), but takes things a few steps further, showing kids not only how to encode English, but even how to create their own secret language.

It starts as many books on codes do, with letter substitution codes and historical ciphers. But this one goes further by telling you how to design your own glyphs and a whole new writing system. Why should you be confined to the English alphabet?

This all culminates in a section at the back on designing an entire language. It begins by looking at the sounds you may want to use in your language and how they’ll be put together in syllables and word forms. Then it goes on to look at different parts of speech and the ways they vary in English. For example, nouns have singular and plural forms. How do you want your language to do that? English verbs have different forms for singular and plural and ways to show different tenses. Then there are adjectives, adverbs, and pronouns. And you might even want to make related nouns with similar root forms.

That sounds complicated – but this author makes it seem simple, with lots of worksheet space in the book to play with your ideas. (Buy a copy so you aren’t tempted to write in the library book!)

It turns out the author has done this himself, having invented languages for various films and series, including Game of Thrones. Who better to play with these ideas than kids? And they’re going to learn a lot about how language works while they’re at it.

Find this review on Sonderbooks at: www.sonderbooks.com/Childrens_Nonfiction/create_your_own_secret_language.html