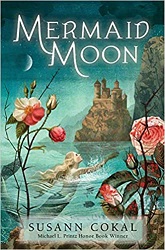 Mermaid Moon is the story of Sanna, a mermaid who comes to land not for the love of a man, but in order to find her mother. She’s been brought up by her father, after the witch of their flok put a powerful spell of forgetting on all of them. But Sanna has been apprenticed to the witch and is learning magic. And she learns her mother’s name and that her mother is landish. Then Sanna learns the magic to give herself legs and go to the island where she may have been born.

The book is set in medieval times, and when the folk of the island see Sanna’s accidental magic, they are sure she’s a saint doing miracles. But the baroness of the island is a witch herself, and she develops her own plans for Sanna.

The language used in all of this is lyrical and beautiful, as if we’re hearing a folk tale, or perhaps an epic heroic tale. Sanna tells her own story, but we also get chapters from the perspectives of people in the islands as well as songs the mermaids sing and a look at what the mermaids do while waiting to see how Sanna’s quest turns out.

Here’s how Sanna’s first sight of the islanders is described:

I limp under a series of archways, and then I see them: the landish folk. There are many more here than belong to my own clan and flok, and they are sitting on broken trees arranged within a big five-sided hollow of stone, with so many shining objects around them that my eyes are dazzled. I smell them fully, and hear them – all at once, overwhelming with sensation, as if smell and sound are always tangible things (to us, they are) and batter my body like waves.

“How are you going to bear them?” my age-mates asked when they heard of my plan. Especially Addra, who is flame-haired and dark-eyed and the most beautiful of all, forever admiring the reflection of her face and breasts in a rock pool – though she has the tongue of a dead clam, as Sjaeldent likes to say, and must rely on her beauty, not her singing, to win her way in the world.

The magic in this book stands out as working very differently from any other fantasy book I’ve read, especially the magic of the landish witch, sinisterly using bones from family members.

Let me close with one of the songs of the Mermaids:

You who sail upon the seaskin –
You look to the skies to guide you.
Why up at air and not down to sea?
Trust, we will show you the way.

Find this review on Sonderbooks at: www.sonderbooks.com/Teens/mermaid_moon.html