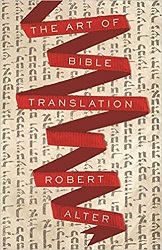 The Art of Bible Translation

This book will be fascinating to people who are interested in the Bible and people who are interested in language and literature. Written by a Hebrew scholar, this book tells me about aspects of the Old Testament in the original language that I had no idea were there, having only read English translations. It gave me a new appreciation for the artistry in the original and how the different types of texts – narrative, poetry, and prophecy, are different from one another.

In short, I didn’t realize how much of an art Bible translation is. This author gave me new appreciation for that.

In the introduction, he explains what brought him to Bible translation and finishes with this section:

Through all this, then, I have developed a sense that my translation, whatever its imperfections, has begun to serve a cultural need for English readers interested in the Bible. That in turn has given me confidence to seek to explain in these chapters why central aspects of literary style in the Hebrew Bible have to be addressed in English translation, within the limits imposed by the disparities between the two languages, and to attempt to make clear what is lost in the failure to address the enlivening and determinative role of style in the Bible. In the chapters that follow I will try to explain how syntax, word choice, rhythm, sound play, word play, and diction are artfully deployed in the Hebrew and why, whatever challenges all these aspects of style pose, they need somehow to be reflected in translation. All this may throw some light on what should be involved in translating the Bible, and perhaps it will also convey some sense of the literary artistry of the biblical writers. Although the impetus for this book was definitely an attempt to consider the challenges of translating the Bible and how they might be met, the topics discussed ended up involving both proposals about literary translation and a general overview of the principal features of style in the Bible. As I have noted, no such study really exists, and that in itself is a symptom of the problem that these chapters seek to address.

I have to admit – I had never before thought of the Bible as ancient literature. As he points out, modern translations work to make the meaning clear, but to do that, they work on sounding like something that could be written today. He points out literary devices used in the original language that make the Bible more beautiful as a piece of literary art written in ancient times.

For example, in the chapter on Dialogue, the author points out, “What is noteworthy is that the Bible provides a remarkable early precedent for novelistic dialogue.” Works of literature like the Iliad and the Odyssey had memorable speeches, but they aren’t about dialogue telling a story. Sometimes translators don’t even present the conversations as dialogue. He talks about aspects of the way language is used in dialogue that isn’t always reflected in translation.

Here’s how Robert Alter concludes his introductory chapter. It conveys his love for the topic and the way the task of translation is indeed an art form:

Hebrew prose narratives, as I hope these examples have suggested, manifest great subtlety and complexity in their literary shaping, and the same is abundantly true, in somewhat different ways, for biblical poetry. This artfulness, which cannot be separated from the religious meanings of the texts, sometimes can be conveyed effectively in English; sometimes an English solution can be found that to a degree intimates the stylistic strengths of the original, though imperfectly; and sometimes, alas, the translator must throw up his hands in despair because there seems no workable English equivalent for the stylistic effects of the Hebrew. In the chapters that follow; I will try to isolate five of the principal aspects of style in the Hebrew that I think a translator should aim somehow to reproduce in English. The aspiration may seem quixotic, but even a distant approximation of the literary art of the original is preferable to ignoring it altogether.

I consider myself a student of the Bible, but this whole book presented new ideas to me, and I thought it was fascinating. I immediately ordered myself a copy of Robert Alter’s translation of the book of Psalms, and will probably end up ordering the entire Old Testament. I’ll grant that there is a narrow audience for this book, but for those within that audience, like me, it’s completely fascinating.

Find this review on Sonderbooks at: www.sonderbooks.com/Nonfiction/art_of_bible_translation.html