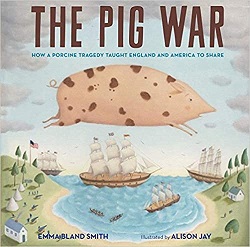 How a Porcine Tragedy Taught England and America to Share

The Pig War is a delightful picture book about an actual skirmish between England and America over the fate of San Juan Island in 1859.

San Juan Island is an island off the coast of the Pacific northwest, whose ownership was not made clear in the Oregon Treaty between America and Britain. Both countries laid claim to it, and both countries had settlers.

One day in 1859, an American settler saw a pig rooting in his potato patch and shot it. The owner of the pig was British. He demanded an outrageous sum for the pig, and a dispute began. Soldiers and ships were called in, and the United States and England were on the brink of war.

This book turns the dispute into a folksy tale. It humorously shows how these things escalate, but also boasts the achievement of the two countries agreeing to share. In the Pig War, no one died except the pig.

I like this section where the book explains how things escalated:

Now, the two bosses, Harney and Douglas, may or may not have been cranky. We don’t know. But we do know that they were both – it must be said – on the hotheaded side. Harney promptly dispatched a company of sixty-four men, under the command of Captain George Pickett. The Americans must have sighed a breath of relief. Such a fearsome display of power would surely make the Brits back off.

Simple, right?
Not quite.

Oh, dear.
What started as a Pig Incident and turned into a Pig Argument was fast escalating into a Pig Situation.

There are detailed notes at the back, and you learn that you can visit the sites of the American Camp and the English Camp today.

These creators turn an unfortunate incident into a delightful story of cooperation and cool heads.

Find this review on Sonderbooks at: www.sonderbooks.com/Childrens_Nonfiction/pig_war.html