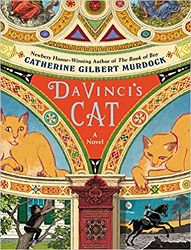 I’ll admit it – time-slip novels aren’t really my thing. My logical mind gets caught up in the contradictions inherent in changing the past, so that I can’t properly enjoy them. However, because this one was written by Catherine Gilbert Murdock, who won Newbery Honor the year I was on the committee with The Book of Boy, I was able to squelch my logical objections and enjoy this book. I suspect most kids will enjoy it, too.

In this book, we meet Federico II Gonzaga, eleven years old in 1511, in Rome as a hostage of Pope Julius II for his family’s good behavior. But he was treated well in Rome, became friends with his Holiness, and got to pose for the painter Raphael, as well as maybe see some of what Michelangelo was doing while painting the Sistine Chapel.

Then one day, there’s a strange large box, a sort of closet, in a deserted hallway, made by Leonardo da Vinci. A kitten comes out of it.

Federico has fun with the kitten, but it dashes back into the box – and disappears. The next night, it comes out of the box again – but now it is a fully grown cat.

Federico’s adventures really begin after the cat disappears again – and comes back with a stranger, wearing strange clothes. This man is terribly interested in Raphael’s and Michelangelo’s sketches, as well as seeing the paintings in the Vatican Palace “when they are new,” whatever that means. The man promises Federico a wonderful sweet called “chocolate” in exchange for more sketches.

But after a couple of adventures with this man, Part II of the book begins in the present day with a girl named Bee, who is house-sitting with her moms at a place in Brooklyn. When Bee finds a cat outside killing birds, she takes the cat to the house next door. The old lady there stares at her in wonder – and shows Bee a drawing of herself – drawn by Raphael. So later, when Bee sees a large box in that house in a hidden study, the reader is not surprised when she follows the cat into the box that looks like a wardrobe and finds herself in Federico’s time. And she’s got a quest – some things to set right.

Like I said, if you don’t let your mind get hung up on how this would actually work, but just accept that of course Leonardo da Vinci could have invented a time machine, the story is a whole lot of fun. I love the details of life in Rome in 1511 and what Federico thinks is normal, and how Bee can slip into that and pass for a page. Did you know that Michelangelo smelled terrible because he didn’t bathe? And that he and Raphael had a rivalry going? And that they hadn’t tasted chocolate in Rome in 1511?

A fun story of a cat moving through time and bringing two kids together across centuries.

Find this review on Sonderbooks at: www.sonderbooks.com/Childrens_Fiction/da_vincis_cat.html