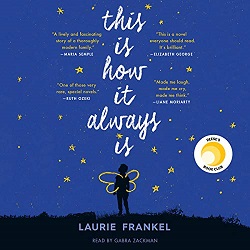 This Is How It Always Is

I heard about this book from my Facebook group of mothers of transgender kids. I have a transgender daughter, though she came out at 27 years old, when she had grown up and moved out long before. This is a book about a family with a young child who doesn’t follow gender norms, and how the whole family navigates that.

I tend to not like “issue” novels, because they can make things work out for their protagonists in ways the real world wouldn’t. But I loved this. In the featured family’s quirky particularity, we don’t feel like they’re trying to speak for every transgender child. But the author is telling us about this particular family, and how they in particular dealt with things when their youngest son told them he wanted to be a girl scientist when he grew up.

Rosie and Penn have an unusual family. She’s an ER doctor. He’s a writer who’s been working on his novel for a long time. They have five children, all boys – or so they thought. As the book begins, we’re told how much Rosie wanted that last child to be a girl. (I like that touch. A mom does wonder if there’s something about their pregnancy that “caused” their child to be transgender.) When she birthed a boy, they thought that at least they knew how to handle boys by now.

Back when they were dating, writer Penn won Rosie over with a fairy tale. And as their boys grow, he continues the fairy tale in bedtime stories to them, stories of Grumwald, a prince. But their youngest, Claude, is tired of Grumwald and wants to hear about Princess Stephanie. The stories begin to change, and so does Claude.

After Claude is so clearly happier wearing dresses and growing his hair long and being called Poppy, the family lets it happen. But after some negative encounters, they decide to move somewhere more accepting – and then why bother telling anyone what is in Poppy’s pants? Why not simply present her as a girl?

But that decision, and that deception, gets bigger than the family can handle and leads to things blowing up. I won’t say more about how the big crisis is handled except to say that it’s believable and gracious, while hitting your emotions hard.

True stories of bringing up a transgender child are valuable and have their own insights. I appreciated that in a novel, the author can let us know what all the different people in the family are thinking and feeling, rather than only what the writer of the memoir knows first hand. This book showed how the youngest child being gender nonconforming affected all the members of the big and quirky family.

This book doesn’t claim to have easy answers, and it does show the parents’ struggle to do what’s best for their child – and how even that brings some problems. This is a compassionate and nuanced look at a quirky and loving family trying to support their child and help that child be the person they were born to be.

Find this review on Sonderbooks at: www.sonderbooks.com/Fiction/this_is_how_it_always_is.html