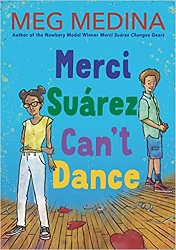 Merci Suárez is back! Now she’s thirteen years old and in seventh grade, having navigated everything life threw at her in sixth grade in Merci Suárez Changes Gears. I was super excited when I heard about it, because I was on the committee that chose the first Merci book to win the 2019 Newbery Medal!

Meg Medina is a master of her craft. Like the first book, it’s not a flashy story, but good solid writing about a seventh-grade girl from a Cuban American family negotiating a school where most of the other kids are from richer families than hers, negotiating changes in her family, and figuring out this thing about how everyone around her seems suddenly interested in romance. By the time you’re through the book, you realize Merci’s been dealing with a whole host of issues with grace and nuance. You’ll rejoice with her.

She’s up against her nemesis again, Edna Santos, but I like the way Edna isn’t portrayed either as a simple bully or as someone who suddenly reforms and is shown to have a heart of gold. She’s real – with some annoying traits that last, but Merci also discovers some good things about her.

But there’s a boy who comes into Merci’s life at the beginning of the book, and her feelings about him are confusing. Here’s how the book begins:

It was Miss McDaniels’s idea for me and Wilson Bellevue to work together in the Ram Depot, a job that nobody wants. For the record, I applied for an anchor spot on the morning announcements with my best friend Lena. But wouldn’t you know it? Darius Ulmer’s parents decided it was time he addressed his “shyness issues,” so he got the job instead.

I like the way Wilson, too, is presented as a real person. While the reader is pretty sure he’s going to be important in Merci’s thinking, we aren’t told simply that he’s good-looking, and Merci doesn’t lose her ability to speak when he looks at her. Here’s how he’s described on the next page:

I only knew him from PE and earth science, the quiet kid with freckles across his nose and reddish hair he wears natural. I had noticed his walk, too. He swings one hip forward so his right leg can clear the ground. He says it doesn’t hurt or anything. He was born that way, he told us last year during one of those annoying icebreaker activities we’re all subjected to on the first day of school. Anyway, we hadn’t really talked much this year. The only other intel I had was that his family is Cajun and Creole from Louisiana. He told us that when he brought gumbo to the One World food festival when we were in the sixth grade, and it was pretty good, if you didn’t mind breaking into a full-body sweat from the spices.

Merci and Wilson work well together in the student store, getting good ideas to make it start being profitable for a change.

I thought the not dancing would be all about the Heart Ball, pictured on the cover, which is organized by Edna, and where Merci agrees to be the official photographer at the photo booth to get out of dancing. But that’s halfway through the book. As things go on, her Tía decides to open a dance studio, and she needs all the family to help make it a success. Can even Merci learn to dance?

It was a treat to spend time with Merci again. Like the first, this is a solid school story – with lots of creativity and personality and nothing stereotypical. I can’t help loving Merci, who’s never going to fit into anyone else’s mold.

Find this review on Sonderbooks at: www.sonderbooks.com/Childrens_Fiction/merci_suarez_cant_dance.html