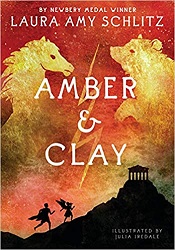 by Laura Amy Schlitz
with illustrations by Julia Iredale

How to explain a Laura Amy Schlitz book? Except to say it isn’t like anything else you’ve read.

Amber and Clay is “the tale of a girl as precious as amber, the tale of a boy as common as clay.” That’s what the god Hermes tells us right at the front of the book. He also tells us that though the boy was a slave boy, the girl started out life lucky. That is, she was lucky, “except for one thing: she died young.”

I let that comment pass, thinking it would happen tragically soon after the book ends, but, reader, that’s not what happens. It’s also not a love story between the two, so her death doesn’t feel as tragic as it might have in that case. The link between the two of them is that the mother of the boy, Rhaskos, is the slave woman who was sold to tend the girl, Melisto.

This is a tale of ancient Greece. Throughout the book eighteen “Exhibits” are shown – archaeological findings from ancient Greece. It’s not clear, but these are probably invented findings, based on actual findings, with the texts changed for our characters. (They could be actual findings, but in that case, I don’t think the illustrator would get credit.) They give the impression that our story actually happened.

Don’t be daunted by the size of the book, because much of it is done in verse, so it reads more quickly than you’d think. The author’s note at the back reveals that she used poetic forms from the poetry of Greece. Gods and goddesses provide some perspective, and we hear about the two children, Rhaskos and Melisto. Their stories start out separate, but begin to come together after Melisto’s death.

My favorite thing about the book was Rhaskos’ friendship with Sokrates. (Which I learned is pronounced So-KRA-teez.) In their conversations, Sokrates asks questions, and we learn much about his philosophy. It also takes us through the trial and death of Sokrates. We end up with a children’s book that helps you understand Sokrates’ philosophy and makes you sad about his death – which is really quite a notable feat.

The story itself captured my mind more than it did my heart. The details about ancient Greece were so fascinating! I didn’t find the characters terribly likable at first, but they grew on me. By the end, I at least hoped for a happy ending for those who were still alive!

And the craft and research that went into creating this book were amazing. I tell people that I can’t possibly predict what any Newbery committee will select – but I have a good idea what makes a contender. I believe this book will be scrutinized by the committee as an amazing accomplishment. And if there are still kids out there obsessed with Greek mythology, this book pulls the reader fully into the daily life of ancient Greece.

Let me conclude with a section from Sokrates’ trial:

So now perhaps someone will say, Aren’t you ashamed, Sokrates, to have devoted your life to asking questions that may get you killed? And here’s my answer: When someone takes a stand, he has to hold his ground and face the danger. When I fought in the battles of Potidaea and Amphipolis and Delion, I held my ground and obeyed my commanders. And when the god tells me to live a life in pursuit of wisdom, questioning myself and others, I cannot desert my post.

Find this review on Sonderbooks at: www.sonderbooks.com/Childrens_Fiction/amber_and_clay.html