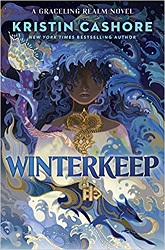 Winterkeep is a fourth book in the series that began with Graceling. Like the rest, it deals with enough new characters and situations that you could enjoy it perfectly well without having read the earlier books. Though I always have to add that you should read them, they’re wonderful! In fact, I checked my reviews, and it’s been nine years since I read Bitterblue, so I’m thinking it’s time to reread them all, and no wonder the details were vague as I read this book. The author caught me up with anything I needed to know.

Bitterblue has now been queen of Monsea for five years, but they have recently learned about Winterkeep, a country across the sea. Bitterblue’s emissaries who last visited Winterkeep never returned, and she’s afraid they’re dead and wants to find out what happened to them. She has also learned that several merchants were cheating her by buying cheap zilfium from her mines – it turns out to be a valuable source of fuel in that other country.

Bitterblue wants to find out more, so she plans a voyage to Winterkeep, along with Giddon, her friend and a member of the council, and Hava, her half-sister, who is graced with the ability to make people see her how she wants them to see her. But the voyage does not go as planned.

I wondered that we had characters who are adult in a young adult novel, but then the reader learns about Lovisa Cavenda, a student in Winterkeep. Her parents are powerful in Winterkeep politics, even though they are part of opposing parties. They plan to host the visiting delegation, but it begins to become clear to Lovisa that they are up to something.

Winterkeep doesn’t have gracelings or monsters like the lands we’ve heard about before, but it does have telepathic foxes, who bond to one human – or so people think. There are also silbercows – seal-like creatures living out in the sea that communicate with selected humans with mental images. And the silbercows know about a giant creature with tentacles – they call her the Keeper – who lives in the depths of the sea.

There are plenty of mysteries and plots winding you through this intriguing and magical world. We learn about nefarious things happening, but not until the end do we find out why. And then our characters must work to thwart those responsible.

Something I love about Kristen Cashore’s books is that she does put her characters through trauma – but she’s realistic about what that costs them and about their struggles to heal from trauma. Even defeating a villain can be costly to a person’s mental health, especially if the villain is your own father, and her books show this more than once.

All of her books pull me in and absorb me and make me want to stay immersed in them until I finish – which is a big problem since they are so long. Be forewarned! This is a magical world that will feel real and will make you care about the fate of its characters.

Find this review on Sonderbooks at: www.sonderbooks.com/Teens/winterkeep.html