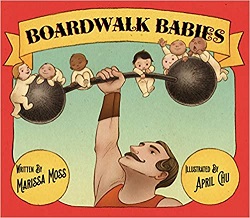 Boardwalk Babies surprised me so much, I started telling all my coworkers about it as soon as I finished reading it. I am planning to booktalk this book in the schools if we get the chance to do this again after the pandemic.

Did you know that when incubators for preemies were developed, they weren’t used in hospitals – but in a side show? This book tells that story.

The cover of the book is perhaps a little misleading, since the tiny babies didn’t pose with strongmen, but were in incubators. They were, however, part of a sideshow. The endpapers show exhibits from circus freak shows of long ago, and the book begins with people going past other carnival entertainment to see tiny babies in incubators mounted on walls, watched over by nurses. Then the book begins telling the background:

Boardwalk babies? Incubator side shows? What was Dr. Couney thinking?

He was thinking of saving lives.

In the late 19th century, hospitals considered premature babies doomed to die. They had no idea how to care for them, so they didn’t. Then Dr. Budin in Paris noticed the heat lamp that kept chicks warm. That gave him the idea to develop an incubator. It was a radical idea, one hospitals didn’t trust. Dr. Budin needed a way to sell the medical world on caring for these tiny babies instead of giving up on them.

The Berlin Exposition of 1896 could be his chance. The show organizers were calling for exhibitors, especially those in science and mechanics. Dr. Budin sent a young doctor who was studying with him to set up an exhibit of incubators, a demonstration of how the warming boxes could save these babies. That young doctor was Martin Couney.

They set up the incubators with diagrams explaining how they could save lives, but they didn’t get much attention. Dr. Couney decided what they needed was actual tiny babies. That would get attention!

He went to Berlin’s Charity Hospital and asked for premature babies to show how well the incubators worked. Empress Augusta Victoria was in charge of the hospital, and she gave him permission to take as many tiny babies as he wished, because they were going to die in the hospital anyway.

After that, the exhibit took off. One problem was that although they’d asked to be placed in the scientific section, their exhibit was in the amusement area. So he turned the babies into an attraction! He dressed them in bigger clothes to make them look even smaller and played up their tiny size. All the babies survived.

Dr. Couney took the incubators to more exhibits in the U.S. Then in 1903, the Baby Incubators became a permanent part of Coney Island. He made sure the babies got the best care, hiring nurses to feed them and watch over them around the clock. Since they charged admission to view the babies, they were able to accept any premature infant free of charge, and took on babies of all ethnicities, religions, and skin colors. One day, Dr. Couney’s own baby girl was born prematurely, and the incubators saved her life.

The point of the exhibition was to convince hospitals to use this life-saving technology, but it took nearly forty years for that to happen. The Baby Incubator exhibit on Coney Island didn’t close until 1943, when incubators were now regularly found in hospitals and preemie survival chances had improved across the country.

This book blew me away that such a life-saving medical innovation started out in a sideshow. It’s also rather astonishing that newborn babies were entrusted to that sideshow – because hospitals had given up.

I’ve given the highlights, but you and your kids will want to read this amazing picture book for yourselves.

Find this review on Sonderbooks at: www.sonderbooks.com/Childrens_Nonfiction/boardwalk_babies.html