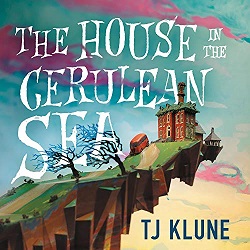 The House in the Cerulean Sea

I listened to this book based on several recommendations from my Silent Book Club Facebook group as a feel-good read. I was delighted with the story. It felt like a familiar children’s fantasy book opening, but then I realized the twist is that the main character is a man in his forties.

Linus Baker has worked for the Department in Charge of Magical Youth for seventeen years. His reports are meticulous and he cares about the children in the orphanages that he inspects. No matter what their alarming magical capabilities, children deserve to be well-cared for.

However, when Linus is not in the field inspecting orphanages, his life at the office and at home is gray and dreary. Besides the constant rain and the rows of desks a little too close together for someone of Linus’s girth, there’s a supervisor always looking for reasons to give demerits. So one day when she calls out Linus and tells him to report to Extremely Upper Management, he thinks he’s in big trouble.

But because of those meticulous reports, Linus has been asked to inspect an orphanage that is Classified Level Four because of some very unusual magical powers in the children. He’ll spend a month there, and he’s expected to keep an objective demeanor.

And that’s where if the story were a film, it turns from black-and-white to technicolor. The orphanage is a house on an island in the Cerulean Sea. And this is where the book turns to one of those stories where the adult’s life is transformed because of the love of children – but again, the twist is that this time we’re seeing it from the adult’s point of view. Oh, and also because the children are extremely unusual.

The master of the orphanage, Arthur Parnassas, is also unusual. As Linus gets to know the children and Arthur, he sees someone training some rather alarming children with wisdom and grace. He needs to stay objective, but he also wants to do what’s best for the children.

It’s not too much of a spoiler to tell the reader that one of the children’s files says he is the antichrist, and his father is the devil. If you know anything about what the Bible has to say about the antichrist, as I do, you’ll know that they get every detail about that wrong. However, if you can shake that aside and think of Lucy as a fantasy creature and a little boy who is presumed to be evil because of his parentage, and who plays on all the stereotypes of that parentage – but who Arthur teaches Linus to see as a child with as much potential for good as any other – then you will still thoroughly enjoy this book.

I didn’t like the narrator at first, because I think he puts pauses in odd places, but he grew on me and seemed right for Linus Baker, a bureaucrat who lives his life by the book – the book of Rules and Regulations that he carries around with him.

This is a lovely warm story of transformation and the wonder of children – even wildly diverse children. And there’s even a nice bit of romance.

Find this review on Sonderbooks at: www.sonderbooks.com/Fiction/house_in_the_cerulean_sea.html

Source: This review is based on a library eaudiobook from Fairfax County Public Library.