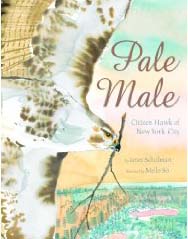 illustrated by Meilo So

Here’s a beautiful picture book true story of a red-tailed hawk that flew into New York City in 1991 and made his home on a building across from Central Park.

The building occupants weren’t too happy with a nest on their building, though the citizens of New York were thrilled.  The hawk’s pale coloring made him distinctive and easy to spot, so bird watchers avidly watched his efforts to settle in and start a family.

Lovely watercolors illustrate this gentle story of a wild creature learning to live alongside humans.  It also tells how important the efforts of humans were for him to be able to keep his home.