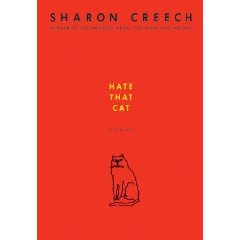 Hooray!  Miss Stretchberry moved up a grade, and Jack is in her class once again!  This wonderful follow-up to Love That Dog features Jack doing further explorations with poetry as well as coming to terms with the cat next door.

Hate That Cat plays with language, as Jack writes poems in the style of poets like William Carlos Williams, Walter Dean Myers, and even Edgar Allen Poe.  (The example poems are included at the back.)

This is a wonderful exploration of what you can do with poetry, but along the way it tells a heart-warming story about Jack, who still misses his dog, Sky.

Here’s a wonderful poem Jack writes about his mother, who is deaf:

See her hands in the air waving here waving there!

in a swish and a bound

To the silence of the air

to the silentabulation of the hush

of the humming and the hushing

This book doesn’t take long to read, but it will inspire even an adult reader to look at poetry in a new way.