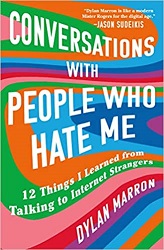 Conversations with People Who Hate Me

12 Things I Learned from Talking to Internet Strangers

I am so impressed with this book and so inspired by it.

As it happens, the morning before I picked this up, my pastor had preached about empathy. He said that when we interact with people we disagree with on the internet, we tend to look at them at a distance, through binoculars, focusing on our broad differences. But empathy comes close and sees people as individuals, in all their humanity and particularities.

The amazing thing Dylan Marron has done is achieved empathy even on the internet.

I was excited about this book because I enjoyed Dylan’s videos for Seriously.TV a few years ago. He’s a gay person of color, and made wonderful points from a progressive perspective, and I was onboard and cheering for his side of the debate.

But he, amazingly, brought things beyond debate to empathy. As you may guess, the videos that I liked so much had plenty of people who felt the opposite and told him so in no uncertain terms. But Dylan explains in this book that since the videos were posted on Facebook, he was able to look at the commenters’ Facebook pages and find out these were humans saying harsh things, not monsters.

And that started a project that became a podcast, “Conversations with People Who Hate Me.” He found detractors who said harsh things (though ruled out the death threats) and engaged them in conversation. Found out about who they were as people. It wasn’t about debate, but was about empathy, about seeing people with different opinions as humans worthy of respect.

Dylan tells that story in his book, and it’s a beautiful thing to watch. I’m not sure I could do it. Dylan does point out that he’s coming from a place of privilege, and some people are so abused, it’s too much emotional work to try to have empathy for their abusers. But I’m coming from a place of privilege, too, and I simply have a hard time looking past opinions I think are despicable. I easily forget that they are humans who hold those opinions for reasons. And Dylan Marron inspired me to try, showed me that it’s not impossible, and has given me an amazing example of human kindness.

He didn’t necessarily change minds with these conversations. And that wasn’t the point. But he did achieve the goal of the participants in the conversations seeing each other as fellow humans, and not as enemies.

The book does outline lessons he learned and things he noticed along the way. There are many obstacles to finding empathy, and he didn’t always make it past those obstacles. But there’s so much beauty in the attempt.

It all goes back to what my pastor talked about — empathy. One of the lessons that Dylan learned is that empathy is not endorsement. He still disagrees with many of the people he interacted with. But he sees them and knows human details about them and thinks of them as friends. And that’s amazing to me — and I want to learn to do it myself.

In his last chapter, he discusses how “snowflakes” make a good metaphor for his guests, in all their unique individuality.

And just as snowflakes are breathtakingly beautiful up close, my guests are breathtakingly beautiful up close, too. From the moment they first say “Hello” I am able to appreciate them as individuals and it is at this close range — voice to voice — that it becomes clear that they aren’t my enemies at all, no matter how vehemently we may disagree. Hearing Josh’s laugh, or Frank’s accent, or learning the tiny detail that E was applying for jobs around the time of our call, allowed me to see them as human, and this opened the door for empathy. And as I walked through that door, my fear dissipated.

I highly recommend this book, partly for the reasons Dylan Marron writes in the final paragraph:

One conversation will not heal the world. Empathy alone will not cure what ails us. Inspiring words will not protect us from harm. But in an era when we feel increasingly isolated, when we speak to each other on platforms that divide us by rewarding competition over connection, conversation is a tiny, enormous, mundane, epic, boring, thrilling, simple, complex act of rebellion that builds a bridge where there wasn’t one before.

Find this review on Sonderbooks at www.sonderbooks.com/Nonfiction/conversations_with_people_who_hate_me.html