Monday morning, June 27, 2022, I drove into DC for the fourth day of ALA Annual Conference. I began the day in the exhibits and got books signed by, among others, Travis Jonker and Varian Johnson. Here’s how my piles looked after the fourth day! 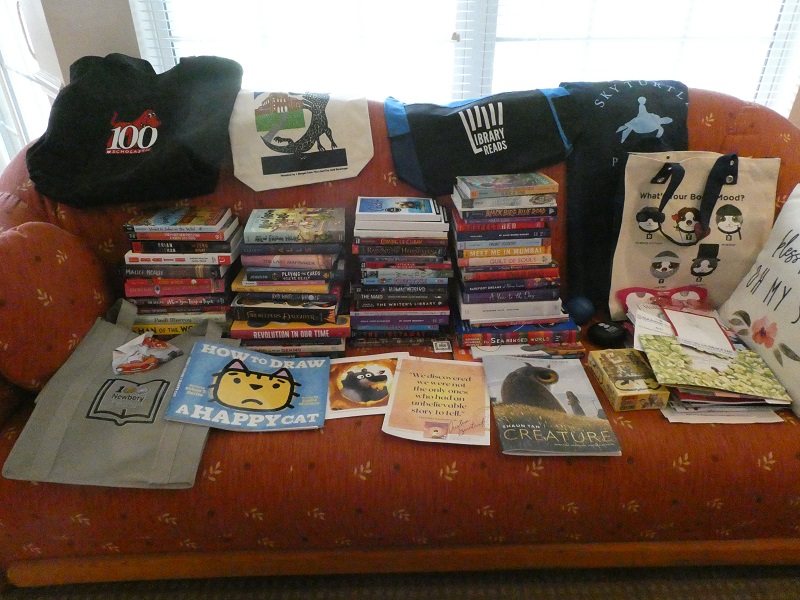 Then I went to a panel discussion with Yuyi Morales, whose book Dreamers (my personal favorite picture book from my Newbery year) was an important part of the story in this year’s Newbery-winning title, The Last Cuentista, by Donna Barba Higuera. 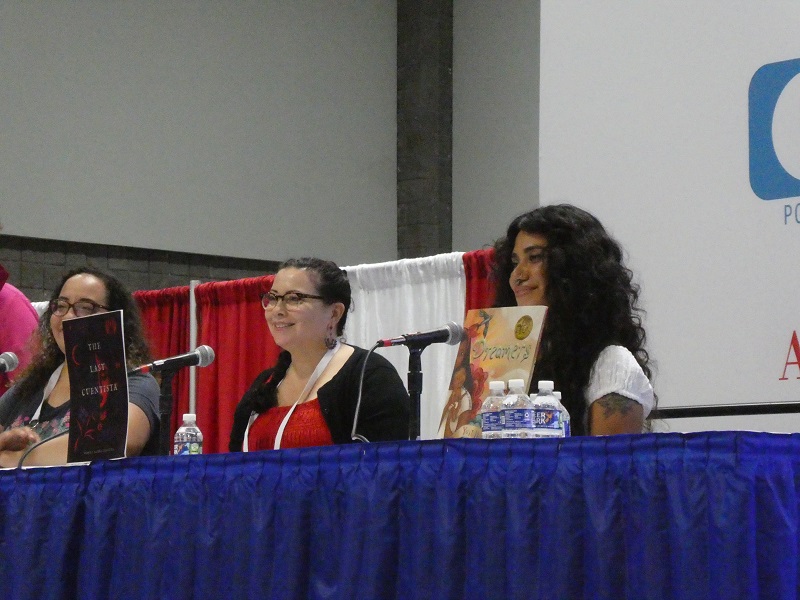 Shelly Diaz, the reviews editor of School Library Journal, was the moderator, so the first question she asked Donna was “When did you read Dreamers and what did you think?

DBH: In an earlier version, the book the little brother treasured was Frederick, but then she read Dreamers, and it changed everything. It’s about collecting vision and hope.

YM: She was very moved when she read The Last Cuentista. It made her cry. A connection she never would have dreamed of. The story felt as real as when other children see themselves in Dreamers. Seeing the book carried by Petra and Javier — told her she’s done her work.

SLJ: Who was a librarian who affected you?

DBH: Mrs. Hughes at a small rural library. She’d have books set aside for her to read. She knew what she liked and the worlds she was living in.

YM: Nancy, a children’s librarian, welcomed her. She didn’t understand either the language or the dynamics of the library, but Nancy and the other librarians created a space where she felt safe.

SLJ: What can we do?

DBH: Keep putting books in the hands of children. It’s a lot of pressure and easy for the public to say. Kids will find a way to get these books. Librarians are really doing a lot already.

YM: In Mexico, books aren’t used so much for education. We’re going to have to fight like warriors. Books still need to be created. We need to have and protect those books and get them in the hands of children. They should be everywhere.

DBH: It can’t just be librarians. Ask. There will be parents and teachers who support freedom to read.

SLJ: Has anyone seen something in your story that surprised you?

YM: All the time. The San Francisco main library filled her with wonder. She did a reading there and it felt like coming back home. A homeless woman said, “This is me and my child.” It’s written to give everyone the value of their stories.

DBH: She’s surprised by kids who know the folklore and mythology. As a kid, she’d thought they were something her grandma made up. She didn’t expect recognition from children — a satisfying surprise.

SLJ: Both books have focus on folklore and mythology.

DBH: She did lots of research. Oral tradition is one version. El Canejo in the moon is a story lots of kids haven’t heard — but she heard it as a child.

YM: Her favorite thing was that Petra made the stories her own — just like children in classrooms. Kids take from stories what they need, not what she intended.

She also does research. In Dreamers, she put in butterflies and other animals that migrate. Snakes make us fearful – but we’re about to learn something important. It has vital energy.

SLJ: What are you working on now?

DBH: Picture book about her own journey, and El Cuycuy story. Another sci-fi novel with lots of moving parts.

YM: The more books she makes, the longer they take. She has a very different process now, related to her own growth.

“Our biggest rebellion is to be happy.”

And happiness is connected to the well-being of everyone. 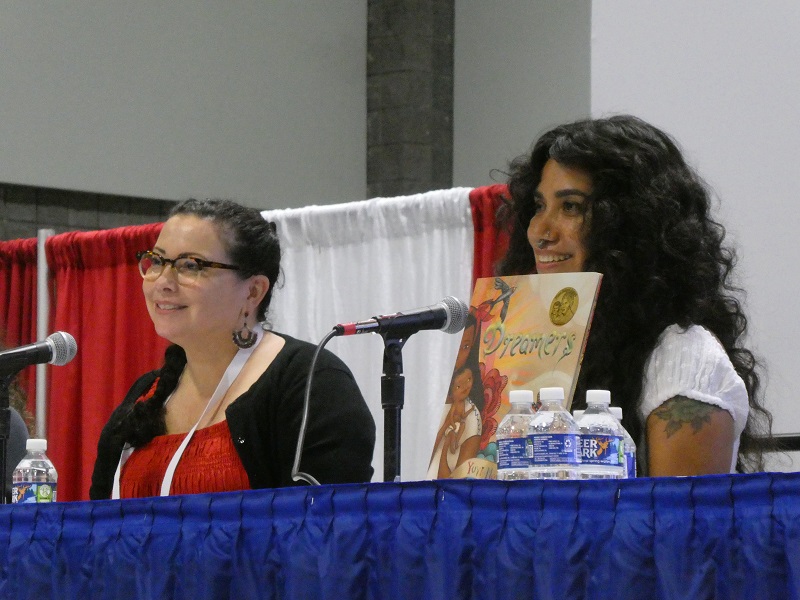