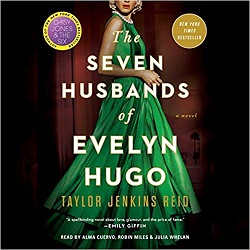 The Seven Husbands of Evelyn Hugo

I heard about this book on Book Tok and thought I’d give it a try. I’m not completely sure why, because I’ve never been a fan of celebrity tell-alls, and this is essentially a fictional celebrity tell-all, telling the life of a glamorous Hollywood icon, the most beautiful woman in the world.

But once I started, the book pulled me in quickly. Instead of starting with the glamorous Evelyn Hugo, the book begins with Monique, a struggling biracial writer who works for an upscale magazine. Her new husband recently decided to move to the west coast, and she didn’t go with him, because this magazine is her chance and she needs to be in New York. So she’s thinking about her empty apartment and short failed marriage.

But then her magazine tells her to go interview the now-reclusive Evelyn Hugo for a feature article. When she tries to figure out why, it turns out that Evelyn Hugo requested her specifically. And when she begins the interviews, she learns that Evelyn doesn’t actually want to do a feature article. She wants to give her story to Monique to publish in a book after Evelyn’s death — but she won’t give Monique any idea if she has a reason to anticipate that will happen soon. The book will be worth millions, but meanwhile, what does Monique tell her employers?

And as we hear Evelyn’s life story, we get more and more pulled in. Despite the seven husbands, she’s no King Henry VIII. It’s not too much of a spoiler to say that Evelyn is bisexual and the love of her life was a woman. But in Hollywood beginning in the 40s and 50s, that wasn’t something she could let people know and still have a career.

The book does have some raunchy moments. But mostly, you’re pulled into the life of the “most beautiful woman in the world” and come to understand her choices, even the questionable ones. In the middle of the book, I wondered why I’d been pulled into a fake celebrity tell-all, but by the end, I felt like something deeper and more important was going on. Monique gains perspective from hearing Evelyn’s story, and the reader will, too.

Oh, and if you start out by liking celebrity tell-alls, you should enjoy this book all the more!

Find this review on Sonderbooks at: www.sonderbooks.com/Fiction/7_husbands_of_evelyn_hugo.html