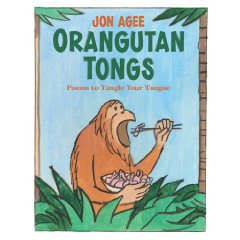 Poems to Tangle Your Tongue

This book is entirely too much fun.  I brought it home and read it to my teenage son, and, as I suspected, he couldn’t resist trying it himself.  For Dr. Seuss’s birthday, we recently had a tweetle beetle binge from Fox in Socks, so it was fun to read to each other and laugh from a new book where I didn’t have the advantage of about forty years of practice.

Orangutan Tongs (Can you resist saying that title aloud?) is a book of tongue twister poems, with illustrations.  They are all quite silly and good for fun and laughter.

My son claimed that he had not been practicing, but I found it highly suspicious that when I came home from work the next day, he was suddenly able to recite the Peggy Babcock poem: