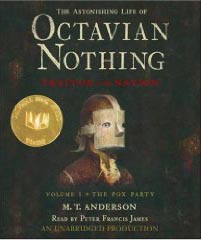 The Astonishing Life of Octavian Nothing
Traitor to the Nation
Volume I: The Pox Party
by M. T. Anderson
Read by Peter Francis James

I decided to listen to this book on CD so I would finally read it. I had given the book to my son the Christmas after it was first published and had been meaning to read it. Then the second volume recently did very well in School Library Journal’s Battle of the Books. So I decided to listen to the book on the way to work and back. (And now that I have a longer commute, this is a good way to get books “read.”)

Octavian Nothing is amazing in its scope. Beginning just before the start of the American Revolution, Octavian lives at the Novanglian College of Lucidity. His mother was once a princess in Africa, but now she and Octavian are the only inhabitants of the house who go by names instead of numbers.

Octavian is trained in music, science, philosophy, Latin, Greek, and French. But he comes to learn that this training is all part of an experiment — an experiment designed to show the mental capacities of people of African descent. He also learns that there are inconsistencies in the philosophy of men who are fighting for “freedom” while owning slaves.

This book is by no means cheery, light reading. But it is powerful and moving. M. T. Anderson beautifully writes the characters voices as they would have expressed themselves at that time. The narrator, Peter Francis James does a wonderful job of giving each character distinctive voices, so you can tell who is talking simply by listening. In Octavian’s mother’s voice, I heard someone regal and dignified. In Mr. Gitney, a precise scientist.

The story is truly astonishing. I will definitely be reading the next volume, and have only to decide whether to go with the print or audio version.

Find this review on Sonderbooks at: www.sonderbooks.com/Teens/octavian_nothing.html