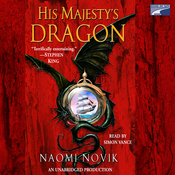 His Majesty’s Dragon reminds me of a Patrick O’Brian naval adventure story — with dragons!

Set in an alternate world where dragons are used for aerial combat, the book opens as Captain Will Lawrence discovers a ready-to-hatch dragon egg on the French ship he has just captured. He orders all the officers to draw straws to decide who will have to give up their life on the navy, harness the dragon, and switch to the lonely life of an aviator. They all know that the new aviator will henceforth have mainly the dragon for company.

However, the newly hatched dragon has his own plans and chooses Lawrence himself. Without having given it thought ahead of time, he names the dragon Temeraire, after a ship he once served on. Then he must leave the Navy to train with Temeraire for the expected imminent invasion by Napoleon’s forces.

The facts of dragon training are presented matter-of-factly, as we learn along with Lawrence how it’s done. It’s all taken as seriously as if these were sailing ships of the time, and you find yourself completely believing in this world and coming to understand the strategies of dragon combat.

As you might expect, despite his youth and inexperience, Temeraire and his captain are drawn into a great battle at the climax. It’s all exciting and fascinating.

I listened to this book on my way to work, and found myself quickly drawn in. Simon Vance presents the different voices so you can recognize who is speaking. I found life in His Majesty’s Aerial Corps to be so intriguing, I quickly forgot it had never really happened.

Yes, an aviator’s life is limited in human companionship, but Lawrence quickly finds that Temeraire’s companionship more than makes up for it.

This is a brilliant book, and I’m looking forward to listening to the rest of the series.

Find this review on Sonderbooks at: www.sonderbooks.com/Fiction/his_majestys_dragon.html