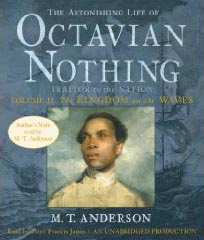 The first volume was set just before the start of the American Revolution. Octavian is a slave in Boston who is brought up in an experiment to see if someone of the Negro race can benefit from a scholarly education.

Octavian does benefit, and his scholarly voice is heard throughout the books.

In The Kingdom on the Waves, Octavian goes to fight for the British, since they have offered freedom to all slaves who fight on their side. This gripping tale has him in battles, facing the Yankee enemy, but also small pox and the danger of being captured and put back into slavery.

Octavian makes new friends in the company of freed slaves, and tells their stories, too. The story of how his old friend Bono escaped and got his exquisite revenge had me laughing out loud. I wanted to share the story with someone, it was so excellent — but it had been set up with the entire earlier volume, so I had to be content with chuckling over it myself.

This book is definitely NOT cheery reading. At one point, I had to look at the print copy and check the last page to make sure Octavian and his friends don’t all die at the end or go back into slavery. Come on, I knew they were on the losing side of the war, and it seemed like every terrible event that could happen was hitting them along the way. I had to know the ending was happy, or I just couldn’t handle it!

All the same, this book is a masterpiece. M. T. Anderson opened my eyes to a part of our country’s history as I never imagined it. He clearly did exhaustive research to make the writing authentic, and with Octavian’s cultured, well-educated voice, wrenches your emotions to care about these people and helps you understand what things must have been like.

The characters are distinct and are portrayed with appropriate voices by Peter Francis James, making the audiobook easy to follow even when the story is on such an epic scale. I admit I’m not sure I would have gotten through the book in print form, as I’ve gotten too much in the habit of quickly reading lighter fare. Almost anything I read is lighter than this, but I felt like I was learning much about history as I listened, and I definitely wanted to know what would happen to the characters. And the beauty of a longer commute is that I don’t begrudge a longer book when I’m listening in the car anyway.

A magnificent and eye-opening conclusion to a compelling story.

Find this review on Sonderbooks at: www.sonderbooks.com/Teens/kingdom_on_the_waves.html