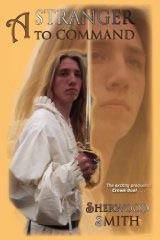 A Stranger to Command

Recently, when I was feeling sick and without much energy, I decided to indulge myself by rereading Crown Duel, by Sherwood Smith. I didn’t realize it would blow the entire afternoon, since I wouldn’t be able to stop until I finished. In this case, knowing what is going to happen makes the story even more compelling as we watch the main character figuring things out and notice the hints the author placed along the way.

I’m not sure if I would have liked A Stranger to Command so much if I hadn’t already loved Crown Duel, but as it was, it gives intriguing insights into court life under wicked king Galdran, and shows us how Vidanric learned to be so awesome. (I’ll call him that because that name doesn’t show up until much later in Crown Duel, so it’s not as bad a spoiler if someone disobeys me and reads this review without reading the first book.)

It turns out that Vidanric’s parents sent him to the academy at Marloven Hess to get him out of the way of the evil Galdran — the same school that Inda went to in the book Inda, though it sounds like that was hundreds of years earlier. The king of Marloven Hess is Senrid, so the next book I will be reading is Sherwood Smith’s Senrid, to find out more about him. She definitely needs to write a book about what takes place after Vidanric is king, since in this book he establishes a friendship with King Senric.

In fact, this book is where Vidanric absorbs the idea of being a king some day. He learns how to fight, he learns about strategy, and he learns to command. He also learns about love, and we can see how his painful first experience would make him particularly drawn to Meliara’s charms.

I’ve long thought that in all of her books, Sherwood Smith seems to have an excellent and almost overwhelming grasp of the politics of kingdoms. I don’t know too much about it myself, but she completely convinces me that the way she describes the politics is entirely realistic. In Crown Duel, Vidanric shows Meliara that she hadn’t considered the practicalities of her revolution, but in A Stranger to Command, we see how he himself first begins to consider political realities of ruling.

My one quibble with the book is that Vidanric leaves Marloven Hess very abruptly, as they are being attacked — and we never learn how that is resolved or how his friends fare. (She definitely needs to write another book!) In fact, I decided I had to read Crown Duel yet again to see if she had put in any information about their fate. Little did I realize that only a week after my last rereading it, the book would still captivate me enough to lose another entire afternoon because I couldn’t bring myself to stop! Of course, I suspect I may just be a sucker for books where a sinister tall handsome stranger carries off the heroine on a horse and it takes her the whole book to realize how awesome he is and that she loves him and he loves her back. Robin McKinley’s The Blue Sword can also be described that way, and it’s another of my absolute favorite books.

Even though A Stranger to Command did not have the romance of Crown Duel, it pulled me back into that world, intrigued me, and let me enjoy the process of a future leader learning to command.

Find this review on Sonderbooks at: www.sonderbooks.com/Teens/stranger_to_command.html