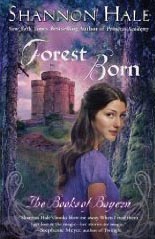 It’s always a momentous event when a new Shannon Hale book comes out, and Forest Born adds another story to the Books of Bayern series. I eagerly pre-ordered this and when it arrived on its publication date, I snapped it up and didn’t stop until I’d finished. I will have to read it again in a week or two to savor its goodness more thoroughly!

I like the way Forest Born explores themes that came up back in the first book, The Goose Girl. Naturally, if you have read the other three Books of Bayern, you won’t need my urging to read this one. If you haven’t, I recommend that you start with The Goose Girl, a retelling of the Brothers Grimm fairy tale.

In the first book, Shannon Hale takes an idea loosely hinted at in the fairy tale, and has her heroine Isi learn the language of some animals, and the language of the wind. She learns the story that she repeats in Forest Born:

“When the creator made the world, everything had its own language, and all could communicate freely — tree to wind, rock to snail, flower to honeybee. Last of all, the creator made people, and they strode over the land, speaking strong words and taking control. They broke the balance, and one by one knowledge of the languages was lost, leaving creatures deaf to any but their own.

“But as moons rose and fell and days and nights did a spinning dance, different sorts of people were born in the crannies of the mountains and wilderness. Born with a first word on their tongues, they could hear and learn new languages. As they found one another and taught one another, three gifts were named — nature-speaking, animal-speaking, and people-speaking. Though rare, now there were people again who could understand the language of fire and wind, of bird and horse, and of people, too. The last, however, proved the most dangerous.”

In Enna Burning, Isi’s friend Enna learns the language of fire, and uses it to deadly effect in the war with Tira. But both friends learn that they need balance — that knowing only one language will overwhelm them.

In River Secrets, they are trying to establish peace with Tira after the war, and encounter and make friends with a water-speaker. Once again, there needs to be balance. Razo’s sister Rin calls those three women “the Fire Sisters.” They are truly powerful.

Now it is Rin’s turn. She has been able to listen to trees and hear their calm peace all her life. But after she does something she’s ashamed of, all she can hear from the trees is loathing and fear. She goes to the palace to get away, finds work tending the little prince, and gets caught up in a plot against the royal family. Another fire speaker tries to harm the king, so it is natural for the Fire Sisters to set out to deal with them.

Rin follows and ends up learning much about her own gifts. I like the way Rin’s abilities are essential to averting disaster, even with such powerful companions.

I like the way Forest Born brings the plot full circle, echoing issues that came up in the first book, The Goose Girl. I like the way the new abilities work, and especially the new aspects of some old abilities already seen. It all seems so right.

I like the way Rin sees that Isi is truly a queen indeed. She felt so inadequate back in the first book, but we can see how she has grown to fill the role she was born to fill. Along the way, Rin makes plenty of discoveries about her own place in life, and along with an exciting plot, terrible danger, women with awesome powers, and the company of much-loved friends, Forest Born is truly a wonderful book.

Find this review on Sonderbooks at: www.sonderbooks.com/Teens/forest_born.html