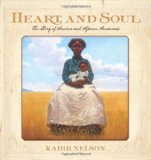 The Story of America and African Americans

Kadir Nelson’s paintings, as usual, are stunningly beautiful in this book. His use of light makes the people seem warm and alive.

In this book, he takes the voice of an old woman whose family has been in America from the start. She talks about the slaves who fought in the Revolutionary War. Then she talks about her grandfather, Pap, who was born in Africa, captured in 1850 when he was only six years old, and brought to America. She traces all the changes Pap saw — The Civil War, Reconstruction, moving West, the Great Migration, and through the Depression and the Second World War. She talks about the Civil Rights Movement as she saw it herself, and finishes up with an Epilogue that includes these paragraphs:

“Forty-five years after Dr. King spoke on the steps of the Lincoln Memorial, I marched my old legs to the polls along with millions of other Americans to vote in an historic election. It was the first time that an African American — Barack Obama — had won the Democratic nomination and appeared on the national ballot for president of the United States. As I cast my vote, I thought about my grandfather Pap, who didn’t live to see this moment, and my three children and two brothers, who did; I thought about my mother and father, and my aunts and uncles; I thought about Abe Lincoln, Frederick Douglass, and Harriet Tubman; I thought about presidents Kennedy and Johnson, Dr. King, Thurgood Marshall, the Freedom Riders, the marchers, and all the people who lived and died so that I might walk into this booth and cast my vote. I thought about them all and smiled; and as I walked away, I closed my eyes and said, ‘Thank you.’

“Our centuries-long struggle for freedom and equal rights had helped make the American promise of life, liberty, and the pursuit of happiness a reality for all Americans. We have come a mighty long way, honey, and we still have a good ways to go, but that promise and the right to fight for it is worth every ounce of its weight in gold. It is our nation’s heart and soul.”

The words alone of this book make a grand, sweeping story of African-American contributions to American life, but combined with the paintings, this book has majesty.

Kadir Nelson’s art continues to be breathtaking. He shows you the dignity and beauty of his subjects.

Find this review on Sonderbooks at: www.sonderbooks.com/Childrens_Nonfiction/heart_and_soul.html