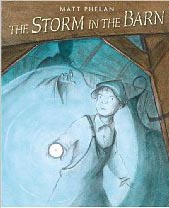 The Storm in the Barn

The Storm in the Barn, like L. Frank Baum’s The Wizard of Oz, is a uniquely American fairy tale, but this one is written in the form of a graphic novel.

Given the setting of the Dust Bowl, this book shows us poor dejected Jack Clark, a kid who’s eleven years old and hasn’t ever seen rain since he was seven. The doctor thinks he may have dust dementia, as his sister has dust pneumonia.

Jack isn’t sure himself. Is it dust dementia, or is he really seeing an evil man made out of a thunderstorm, with lightning in his bag, a man who is hiding in the old abandoned barn and causing all their troubles? If Jack can release the lightning, can he save the country?

The images in this book are haunting and surreal. They will leave the reader wanting to know more about this bit of American history. I like the way the author weaves in Jack’s sister reading from Baum’s Oz books, since telling American fairy tales was exactly what Baum also tried to do, along with Jack tales from Europe that fit right in with Jack’s own story.

Find this review on Sonderbooks at: www.sonderbooks.com/Childrens_Fiction/storm_in_the_barn.html