ALA Annual Conference in Anaheim has finished up! I’m now sitting at my sister’s house, with vacation time for the rest of the week (Yay!), so I’m not sure how much I’ll post before I go home. Eventually, I’d like to give detailed notes for each event in my Conference Corner posts. But here, I’ll sum up the things I did.

It all began Friday. I made it to the Opening Session with Rebecca MacKinnon, a fascinating look at how we need to take a careful look at Internet Security and how it applies to human freedom and privacy, or lack thereof, around the world. I got a copy of her book, Consent of the Networked, and got it signed.

Then: The Exhibits. By waiting in line to get my book signed, I had missed the wild “Running of the Librarians” and some of the crazy book-grabbing frenzy that invades our minds at this time. As such, I was able to restrain myself to one suitcase full of books. (Yes, folks, I have a medical excuse. Get over it!)

Here’s a picture of my loot at the end of the conference, combined with my sister’s loot from a one-day exhibit pass. Hers is only one pile. I believe my total at the end was 68 books. (This is huge progress. I think at my first ALA, I came home with twice that many.) 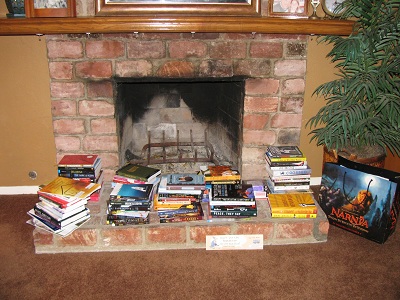 On Saturday, I gave my sister (with whom I was staying) an exhibits day pass and a ticket to meet me at the Margaret A. Edwards Luncheon, but I went on ahead to visit the exhibits (more loot) and then hear a session on Putting Laughter in Literacy with Alan Sitomer and Raina Telgemeier. Alas! Sara Pennypacker, who was also to speak, was held up by a cancelled flight. Then came the Margaret Edwards Luncheon. I stood in line with Garth Nix! (squee!) And then, already having chosen seats at a table, Susan Patron sat down next to me, so we got to talk during the lunch! (squee! squee!) Pictures will definitely follow.

Saturday afternoon included very valuable sessions on Implementing Every Child Ready to Read 2 and then “Traveling the Spectrum: From Interstellar Adventures to Epic Fantasy, the influence of Science Fiction and Fantasy on the world today. This featured the stellar speakers Blake Charlton, Lois Bujold, and George R. R. Martin, so was excellent! Alas, had I but known, those who got a goodie bag of books by the authors had to stand in line for an hour ahead of time.

Afterward, I had the good luck to run into my co-worker from Fairfax County, so we had dinner together. I had an invitation to a publisher dessert at 9 pm, but I was way too tired by then, and went back to my sister’s house.

Sunday I did get there earlier, and caught the speaker Dan Ariely talking about interesting things he learned in researching his book: The Honest Truth About Dishonesty. Afterward, I got the book signed and hit the exhibits. For the 10:30 session, I got to hear my co-members of ALSC’s Children and Technology Committee speak on using apps in public and school libraries, and then got to have lunch with two of them afterward. After lunch, I attended an information-packed session on getting information out of the 1940 US Census. That information is going to be highly valuable to me when I sub in the Virginia Room. Then it was back to my sister’s to change for the Newbery Banquet.

The Newbery Banquet was, of course, a highlight of the whole conference experience. Chris Raschka spoke about art and memory. Jack Gantos had us roaring with laughter. And we were in a crowd of people who love children’s books.

The final day, for me at least, was Monday. This time I managed to get up early enough for the first session: The Digital Lives of Tweens and Teens. Interesting facts about the current group of 10- to 14-year-olds and how these facts impact the way we should serve them.

Then I was going to go to the session on crossover adult/YA books, but it was way too crowded, so I went to the ALSC awards, where the Siebert, the Batchelder, and the Geisel Awards were given, followed by an ALSC member meeting.

Finally, I hit the closing of the exhibits. It was probably a good thing that they had already wound down almost completely, though I was still able to get a copy of Siebert Honor book Witches signed by the author. Then the plan was to go back to my sister’s, but I had locked my keys in the trunk! (Urgh!)

However, after I called the rental car company and they told me it would cost $57, I went to get something to eat and saw my Triple A card. I was able to get it put on my AAA card instead of the rental car company. And, even better, the tow truck driver was so nice, he made me happy to have locked my key in the trunk because it gave me the opportunity to have my day brightened.

Back at my sister’s, I had enough time for a nap before the Printz Awards. All the Printz Award and Honor speakers were stellar, but Daniel Handler and Maira Kalman started it off with a rousing chorus of his song on the accordion, “Without Libraries We’d Be Dumb.” I was a little hurt today to discover he had not actually composed it as a Printz Honor speech, but I do have to share where I found the full text of his “speech” on YouTube. You must note, however, that the crowd at the Printz Award Reception was far, far more enthusiastic.