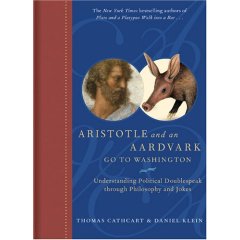 Aristotle and an Aardvark Go to Washington:  Understanding Political Doublespeak Through Philosophy and Jokes, by Thomas Cathcart and Daniel Klein

Here’s a book about logic, explaining formal and informal fallacies.  Doesn’t that sound delightful?  Oh, perhaps I’m in the minority with that opinion.

However, where your run-of-the-mill logic textbook will illustrate its points with p’s and q’s and made-up arguments, this book uses statements made by actual politicians to illustrate the fallacies.  Where those don’t make the point clearly enough, they’ve also used jokes.

The authors say themselves:

“The field of logic — much of it rooted in the writings of the early Greeks — demonstrates what rules need to be followed to go from true propositions to correct conclusions.  Or to put it the other way around, it shows how we can be tricked by logical fallacies, what logicians call formal fallacies.  Epistemology instructs us in what we can deem knowable and why, including how we can sensibly talk about what we are able to know.  That field has given rise to conceptual analysis, a rigorous technique for analyzing language and, well, digging out bullshit in all its varieties.  As to rhetoric and psychology, they show how our minds and emotions can be manipulated by loaded language. . . .

“But hold the phone!  Lest anyone think this stuff is dry as a prairie patty, you should know that we are of the Philogag School of Philosophy, the school that maintains that any philosophical concept worth understanding has a great gag lurking inside it.  As we shovel our way through the political patty field, we will uncover not only deceptions, but — more importantly — jokes that point at them and say ‘Gotcha!'”

I challenge anyone to read this book without laughing out loud!