Tonight I’m beginning my posts of the Top 100 Chapter Book Authors from Betsy Bird’s Top 100 Chapter Books Poll with something of an upset. I hadn’t looked at the totals in awhile, and in the back of my mind, I simply thought that of course E. B. White, having won the top slot so decisively with Charlotte’s Web, would naturally be on top.

But I shouldn’t have been surprised. We all know how much the books by relative newcomer are beloved. Though this time most of us simply voted for the first book in her beloved series, not only was that book #3 in the Chapter Book Rankings, Harry Potter and the Prisoner of Azkaban was #12, Harry Potter and the Goblet of Fire was #98, and yes, every single other book got at least one vote.

Just a little background. Betsy Bird did a poll on her Fuse #8 blog asking people to write in with their Top 10 Chapter Books of all time, ranked in order from 1 to 10. Each book was given 10 points for first place, 9 for second place, and so on. Then she gave us a ranking of the top 100 point-getters. I helped tally up the points, and I was interested in what authors would be on top, since with some it was so hard to choose just one book to vote for. Hence this series of posts.

Here are Betsy’s posts about J. K. Rowling’s three books in the Top 100:

#3. Harry Potter and the Sorcerer’s Stone

#12. Harry Potter and the Prisoner of Azkaban

#98. Harry Potter and the Goblet of Fire

And here are my own reviews of all the books:

I am very proud that I gave the first book to my son Josh on his eleventh birthday, and just as soon as he finished reading it, he urged us to read it as a family at bedtimes. (His little brother was five years old, and we’d started reading them books together, when we could find a book both would like.) The next year, before the book was famous, we gave the book to several other people. One of those was Josh’s fifth grade teacher, and he said it was the best present he’d ever received. When controversy began breaking out over the book the following year, his class put up big “We Love Harry Potter” signs on the classroom windows.

I confess, when my husband told me he wanted a “trial separation” a few months before Harry Potter #6 was due out, I said, “But then you won’t be there to read Harry Potter!” and burst into tears. (He did stay through the purchase of that book, but it was clear his heart wasn’t in it.) He had been the principal reader for all the earlier books, and I had treasured that family time. By #7, my son Josh was away at college, and my ex-husband was in Japan, but I talked my young teenage son who remained to let me read it aloud to him. Sigh. Now I just have to read them on my own. But I will always ALWAYS treasure those memories of reading Harry Potter together, at home and on vacation in England (one year we got the book earlier than everyone else by going to England) and in Germany (we spent a whole day of our vacation in Bavaria reading the end of The Goblet of Fire rather than going sight-seeing). 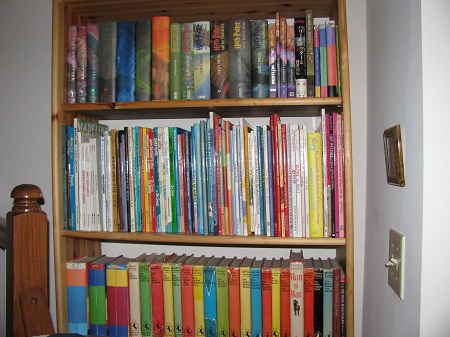 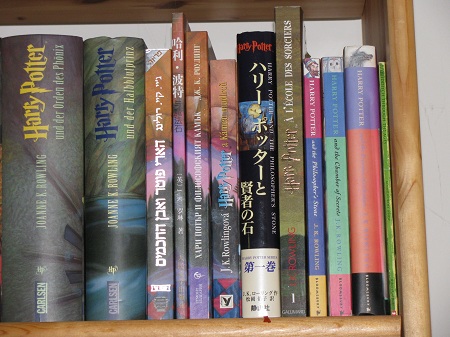 And we have copies of Harry Potter and the Philosopher’s Stone in many different languages: Hebrew, Chinese, Czech, Bulgarian, Japanese, and French. As well as, of course, American, British, and German. (I’ve read the American, British, German and French ones. Not the others.)

Yes, I must admit I’m pleased that J. K. Rowling has the Number One Chapter Book Author spot. She deserves it!