by John Green and David Levithan

I confess I probably wouldn’t have read Will Grayson, Will Grayson if I weren’t such a huge John Green fan. I was won over by hearing him speak about his Printz Honor Winning book Abundance of Katherines three years ago at ALA Annual Conference, and then completely hooked when I started watching his and his brother’s daily video blog through 2007. What can I say? He’s my kind of nerd. Nerd Fighters are made of Awesome.

Of course, I also read An Abundance of Katherines, Let It Snow, and my favorite, Paper Towns. So I thoroughly admire John Green as an author. Though the funny thing about reading his books is that I always hear the main character in my head speaking with John Green’s voice, since I’ve heard him so much on the internet.

Anyway, I was four chapters into his latest book (written in alternating chapters with David Levithan), when I went to the 2010 American Library Association Annual Conference in Washington DC. The exhibits had just opened, and I was frantically grabbing free advance copies of books. I looked up, and there was John Green!

I said, “You’re John Green!” and he graciously conceded that he was. I tried to think of clever things to say. Did I tell him I think he’s a brilliant writer? No, I said I follow his blog. Couldn’t think of much to say after that. Anyway, as he was about to go off to the exhibits, I got my wits about me and asked if I could get a picture with him. He said “David can take it!” as his companions were coming to see what was keeping him — and I realized that familiar face I’d seen with John was David Levithan. So, I insisted on a picture with both of them. This was at the very start of ALA, and it made my night!

On the last night of ALA, I got another picture with John Green, at the reception after the Printz Awards Ceremony. Kind of fitting, since I’d first seen him in person at the 2007 Printz Awards. 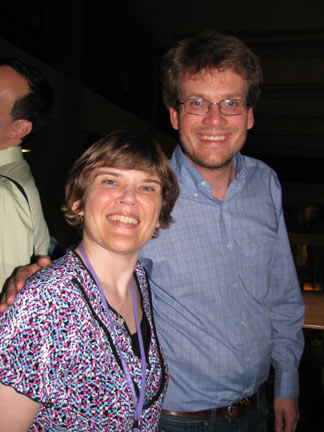 So, as you can imagine, I like the author, and of course I want to like his books. As it began, it seemed a little depressing, so I might have stopped. One of the Will Graysons is clinically depressed. The other one isn’t terribly happy.

It also turns out to be mainly about Tiny Cooper:

If I weren’t a huge fan of the author, I would probably simply avoid a book where one of the main topics is a high school student’s gayness. But I’m glad I didn’t avoid this one.

The book is about two high school students named Will Grayson. They don’t know each other. They live in different Chicago suburbs. One Will Grayson has been Tiny Cooper’s best friend all his life. But that Will recently lost what other friends he had because:

“After some school-board member got all upset about gays in the locker room, I defended Tiny Cooper’s right to be both gigantic (and, therefore, the best member of our shitty football team’s offensive line) and gay in a letter to the school newspaper that I, stupidly, signed.”

Tiny is writing, directing, and performing a musical about his life. So naturally, there is a character named Gil Wrayson, which Tiny assures Will is a fictional character.

Meanwhile, the other Will Grayson (written by David Levithan), is in love with his internet chat friend named Isaac. He’s gay but won’t admit it to anyone else, he’s depressed, and his only friend at school is a girl who’s even more depressing.

I wouldn’t want my teenage son to take the characters in this book as role models, but I don’t think older teens read books to find role models. The characters’ language and humor are crude (which almost got me to shut the book early), but it’s also very clever. The characters do seem completely real. Tiny Cooper is larger than life, but he’s no cardboard cut-out. And the two Will Graysons have conflicting emotions and confusions that seem completely true to life. Though I wouldn’t want my son to take them for role models, I’d be happy to have him find friends like these. Flawed friends, but ultimately the kind of people you can count on, you can tell the truth to.

As Will Grayson says in a moment of confrontation and revelation:

“You know what’s important? Who would you die for? Who do you wake up at five forty-five in the morning for even though you don’t even know why he needs you?”

This book is awesome. Like so many great books do, it helped me put myself in the shoes of someone very different from me, thus looking at my own life and my own world a little differently. I’m glad I read it.

Find this review on Sonderbooks at: www.sonderbooks.com/Teens/will_grayson_will_grayson.html