I discovered Mo with that wonderful classic, Don’t Let the Pigeon Drive the Bus It of course was a 2003 Sonderbooks Stand-out, my top choice for Picture Books. 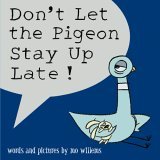 Unfortunately, my kids were too old to appreciate the full power of the pigeon books, but I remember in 2006 when I stayed for a month and a half with my friend, I got to pull them out and read them to her kids. They especially liked it when I read the temper tantrum page. Another Pigeon book, Don’t Let the Pigeon Stay Up Late, made the 2006 Sonderbooks Stand-outs list, once again #1 for Picture Books.

My 2009 Sonderbooks Stand-outs featured another Elephant and Piggie book at #3 in Picture Books, Pigs Make Me Sneeze! How I wish I’d had it back in the day when I taught Intro to Statistics! A picture book lesson that Correlation does not imply Causation! Yes! 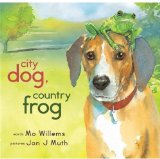 My 2010 Sonderbooks Stand-outs had something new, a book written, but not illustrated, by Mo Willems, City Dog, Country Frog, which was #4 in Picture Books. 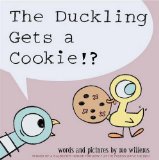 And finally, this year the Pigeon was back! In my 2012 Sonderbooks Stand-outs, The Duckling Gets a Cookie!? delightfully played with the themes from all the previous Pigeon books and hit #2 in my Picture Books list.

Now, I may not have permanent MO graffiti on my blog like Mother Reader, but I’m definitely a huge fan. I think the man’s a genius, and I’ve found that if I want kids to enjoy a storytime, all I have to do is include a Mo Willems book. May he continue to be prolific! I have a feeling he’s going to feature on many lists to come.