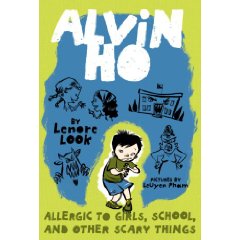 Allergic to Girls, School, and Other Scary Things

Alvin Ho: Allergic to Girls, School, and Other Scary Things, reminded me of Diary of a Wimpy Kid, only for younger kids.  It has similar cartoon drawings generously illustrating the story, and a similar attitude toward school.

Alvin Ho is starting the second grade.  He does not like school.  He says, “If there were no school, my troubles would blast away, just like that.  I would dig holes all day.  I would play catch with my gunggung.  I would watch cooking shows.  I would keep an eye on things.  It would be fantastic!”

Alvin tells us that before he went to school, he was a superhero.  “I was Firecracker Man!  I ran around our house, full speed ahead, screaming at the top of my lungs while beating on a garbage can lid.  I was as noisy as a firecracker on Chinese New Year! . . .

“But now I am Firecracker Man only on weekends and holidays.  There is just no time for it.

It turns out that Alvin has never said one word at school.  He can talk anywhere else, even on the school bus.  But at school, his voice simply doesn’t work.

This book is a lot of fun, with a nice set of school-related scrapes, and Alvin learning to confront his fears.

I did think the chicken pox adventure, where the whole class gets chicken pox after paying to visit the first kid who caught it, was funny, but sadly out of date.  My 14-year-old son was required to get a chicken pox vaccination before he went to school, and I think that’s pretty standard now.  So today’s children, poor things, will never know the joys of two weeks off of school along with the fun of showing off ones spots.

There are some great quirky characters.  Alvin’s Dad likes to use Shakespearean imprecations when he’s angry.  The annoying girl Flea wears an eyepatch.  Alvin’s sister loves to dig holes.  And Alvin himself is a big collection of entertaining quirks.

Alvin Ho is longer than a beginning chapter book, but makes fun, non-threatening reading with lots of pictures for a kid ready to laugh at the trials and tribulations of facing scary things like school and bullies and girls.